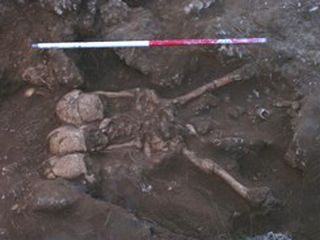 A man buried with three skulls and a mandible or jawbone on his chest in a cemetery unearthed on Efate Island, Vanuatu in the South Pacific.
(Image: © Alex Bentley/Durham University)

More than fifty headless skeletons have been unearthed in one of the oldest Pacific Islander cemeteries in the world.

The individuals were members of a socially complex society, traveling between islands hundreds of miles away, a new study suggests.

The finding could solve a long-held debate over whether the Lapita people, thought to be ancestors of the Polynesians, were isolated on individual islands or interacted with other distant Lapita tribes to find marriage partners, exchange information and maintain social ties. Results, detailed in the October issue of the journal American Antiquity, paint a picture of the ancient people as expert seafarers.

"The real question is did they live in isolation or did they keep in communication with the islands that might have been further back in their ancestry, because they generally spread from west to east across the Pacific," said lead author Alex Bentley, an anthropologist at Durham University in the UK.

The 3,000-year-old skeletons were uncovered in 2003 at an archaeological site on Efate Island, part of Vanuatu in the South Pacific. None of the buried individuals had a skull attached to the skeleton, though one male was adorned with three skulls lying on his chest.

Though archaeologists over the past 50 years or so have discovered more than 200 Lapita sites, until now these had yielded just 15 to 20 individuals. Finding a graveyard of tens of skeletons could yield a trove of insights into how these people lived.

“This site is that much more extraordinary due to the fact that it is the earliest and by far the largest cemetery ever found in the Pacific," said study researcher Stuart Bedford of the Australian National University. "The excellent preservation and large number of burials, now up to 60 individuals, is giving us a first real chance to study this early colonizing population."

Bentley and his colleagues analyzed chemical isotopes from the teeth of 17 of the buried, headless skeletons. Relative abundances of certain isotopes signify where the people lived, broadly speaking, and their diet. For instance, oxygen isotope levels change with temperature and altitude.

The researchers found four Lapita individuals who were buried facing south, unlike the others, and whose isotope levels were significantly different from the others, possibly indicating a small group of immigrants who traveled from hundreds of miles away, Bentley said. These individuals had isotope levels that matched a more terrestrial diet, as opposed to the marine foods eaten by the other islanders buried.

"There's no way they could be from East Asia. Most likely they were from maybe as far away as New Guinea," Bentley told LiveScience. "The Lapita expansion had already reached New Guinea by the time Vanuatu was settled."

One male, called TEO 10E, was buried with three skulls on his chest and was himself one of the "immigrants," though the skulls on his chest were of the local community. The Lapita initially buried the deceased with heads attached, and only later after the flesh had rotted away did they dig up the graves and remove the skulls, which were kept in shrines or other sacred places.

“It is a sign of veneration of the senior individual. The skulls of all those buried were removed during the mortuary process and presumably curated somewhere," Bedford said. "Upon the death and burial of TEO 10E, these three skulls were retrieved and placed on his chest.”

The fact that the locals were buried alongside the traveling immigrants could imply utmost respect among Lapita.

“The curious burials among the identified group of prehistoric Pacific mariners, who were among the best navigators on earth for the next 3,000 years, indicate they were admired by the locals for their amazing long-distance traveling abilities," Bentley said.

He added, "Maybe these guys were maintaining specific contacts with specific other communities as opposed to just coming in willy-nilly from here and there."