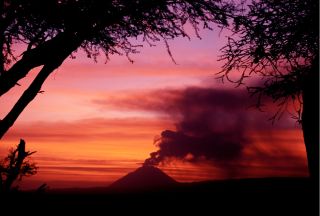 Ol Doinyo Lengai in Tanzania is the only volcano on Earth that gushes natrocarbonatite lava.
(Image: © George Seielstad)

An erupting volcano sends smoke toward the heavens, where Venus, Jupiter and the moon hover close.

This photo, taken on Feb. 3, 2008, and released on June 16, 2014, by EPOD, NASA's Earth Science Division, shows an eruption at Tanzania's Ol Doinyo Lengai. The photographer, George Seielstad, was camping with his son Mark when the eruption occurred.

"We were in a tent camp (the only guests)," Seielstad wrote in an email to Live Science. "Those photos were the scene out the front of our tent when we awoke."

Ol Doinyo Lengai rises up from the Gregory Rift Valley of north-central Tanzania, not far from the Kenyan border. The mountain reaches 9,715 feet (2,962 meters) in elevation, according to the Smithsonian Institution's Global Volcanism Program.

This volcano is the only one on Earth to erupt carbonatite lava within living memory. Carbonatite lava is lava made up of at least 50 percent minerals that contain carbonate ions. The lava that oozes out of Ol Doinyo Lengai is rich in sodium and potassium, and is called natrocarbonatite lava. It also contains very little silica, the mineral that gives volcanic rocks such as obsidian their glassy sheen. [Images: One-of-a-Kind Places on Earth]

Carbonatite lavas are much cooler than typical lava. They erupt at about 932 degrees Fahrenheit (500 degrees Celsius). In comparison, the lava from a mountain like Mount St. Helens in Oregon is about 1,472 F (800 C), and Hawaiian volcanoes spew out molten rock at about 2,012 F (1,100 C).

This chilled-out carbonatite lava looks like black tar, and glows red only at night, according to the Hawaiian Volcano Observatory. Once the lava cools, it reacts with moisture from rain and runoff and turns white. Continued absorption of water reduces the lava flows to brown dust within months of erupting.

Expeditions to Ol Doinyo Lengai's crater reveal a world of lava lakes, fountains and flows. Eruptions sometimes spit out ash, and lava occasionally flows down the upper slopes of the volcano, according to the Hawaiian Volcano Observatory.

For Seielstad, the eruption was a surprise. He and his son were visiting Tanzania to see vistas and wildlife, he said. "The volcano was an unexpected bonus," he said. One of Seielstad's images of the volcano won Viewer's Choice in June 2014 on NASA's Earth Science Picture of the Day.

Coincidentally, the mountain sent up a stream of ash the same morning that Venus and Jupiter were visible in close conjunction with the moon. The coincidence is all the more meaningful because scientists think that Venus may play host to its own carbonatite volcanoes. Landforms seen on the planet's surface seem to have been made by low-temperature, slow-flowing lava, perhaps not unlike the goo that oozes from Ol Doinyo Lengai.