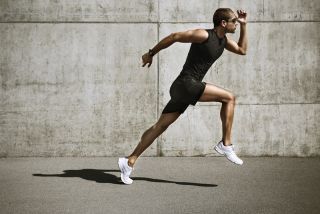 Swinging your arms when you run helps save energy, researchers say.

People naturally swing their arms back and forth while running. Prior research suggested that swinging the arms helps keep the body balanced during running by counteracting the motion of the swinging legs. However, it was unclear whether swinging the arms during running cost or saved people energy, and the few studies exploring the question yielded contradictory results.

"One can imagine that not swinging the arms — that is, holding them in the most relaxed manner possible — would be less expensive metabolically speaking, since we wouldn't have to use the muscles to hold the arms bent at the elbow and to swing the arms back and forth," said lead study author Christopher Arellano, a biomechanist at Brown University.

In the new study, the scientists looked at people who ran often, recreationally and even competitively. "Being in Boulder, Colorado, there is never a problem of recruiting runners to be in our studies," Arellano told Live Science.

The researchers first asked 13 runners to run normally on a treadmill as they measured the rates at which they consumed oxygen and exhaled carbon dioxide. They next asked the volunteers to run without swinging their arms in three different ways — by lightly clasping their hands behind their back, crossing the arms across their chest, and holding their hands on the top of their head. [5 Running Mistakes You Didn’t Know You Make]

However, the researchers cautioned that people seeking to burn more calories should not do so by trying to keep from swinging their arms during running.

"When you constrain arm swing, the spine twists and rotates in compensation," study co-author Rodger Kram, a biomechanist at the University of Colorado at Boulder, told Live Science. "Over the long term, that could be very hard on the spine."

"If you want to burn a little more calories, run a little longer," Arellano said.

Arellano and Kram detailed their findings online July 16 in The Journal of Experimental Biology.