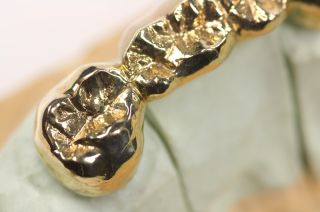 Sparkly, gold grills aren't just for Flavor Flav; ancient Celts may have sought out flashy smiles as well. Archaeologists have unearthed a dental implant in a grave in France that dates to the third century B.C.

The implant — an iron pin that may have screwed into the gum to hold a decorative tooth in place — was found in the mouth of a skeleton in a Celtic burial site in La Chêne, France. The tooth was described in the June issue of the journal Antiquity. [Smile Secrets: 5 Things Your Grin Reveals About You]

Though it's not clear what the false tooth would have been made of, it was likely put in to enhance the owner's smile, said Guillaume Seguin, an archaeologist at Archeosphere in France and co-author of the study.

"In Le Chêne, the replaced tooth is a central maxillary incisor," which is one of the "most visible teeth when you speak or when you smile," Seguin told Live Science in an email. "So there, the intention was probably aesthetic."

The replacement of lost teeth is nothing new: Previous studies have reported on a 7,000-year-old skull from Algeria that sports a replica tooth sculpted from bone. Other excavations have unearthed a 5,500-year-old skeleton from Egypt with a replacement incisor fashioned from a shell. And an Anatolian site has potential implants fashioned from calcite, though the remnant wasn't found in the mouth, so it could be an amulet, the authors wrote in the paper.

These ancient teeth were also likely implanted after death, the researchers wrote in the paper. After all, Egyptians believed that they would use their bodies in the afterlife, so some may have wanted to get started with a full set of choppers.

Seguin and his colleagues were excavating an Iron Age tomb in France when they uncovered the skeleton of a woman who was 20 to 30 years old when she died.

The skeleton was bedecked with finery, including a bronze belt strung with brooches, a bronze bracelet and ring, and a pair of iron shears to trim her hair. Along with coral and amber necklaces that were found in nearby graves, the new discoveries suggest the woman was a member of the Celtic elite, Seguin said.

Though the skeleton was badly preserved, her teeth were fairly intact, with no cavities, tartar or wearing of the enamel, Seguin said.

In her mouth, near where the central maxillary incisor would have been, was a small iron pin. The location suggests it was used as part of a dental implant, which was either inserted into the pulp canal of the root, or into the tooth socket.

Both would have been painful, Seguin said.

If she did receive medicine for the pain during surgery, it was likely from a medicinal plant, such as a weeping willow, which contains acetylsalicylic acid, the active ingredient in aspirin, Seguin said.

The skeleton didn't preserve signs of trauma, but one possibility is that the Celtic woman lost her tooth from either a punch or a fall, Seguin said.

"The central maxillary incisors are the most commonly broken teeth by a facial trauma," Seguin said.

The false tooth was probably inserted when the person was still alive, though it may have been placed after death, the researchers said.

It's not clear exactly what material the tooth would have been made from, but Etruscan elites sported decorative gold teeth. The ancient Celts came into contact with them via trading routes, the authors wrote in the paper. As such, it's possible that the Celts admired the Etruscans' penchant for bling-filled smiles and emulated them, they speculated.