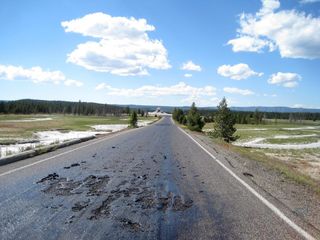 Part of Firehole Lake Drive, a scenic one-way road off of Yellowstone's main loop, was shut down for repairs when oil bubbled to the surface, damaging the blacktop, the Park Service said in a statement. The closure doesn't affect the Grand Loop Road, which sees 20,000 visitors per day during the summer.

Hottle noted that the road problems do not mean the volcano is showing signs of an impending eruption. "The supervolcano is not going to blow," he said.

Road closures from heat damage aren't unusual in Yellowstone, which has more than 10,000 geothermal features and 500 geysers. The park has previously closed Firehole Lake Drive for repairs due to heat damage, Hottle said. "This road has had this particular issue in the past, but it doesn't happen too often," he said.

The Park Service plans to work on repairs through the weekend, and hopes to reopen the road by early next week, Hottle said.

Within the next five years, the Park Service also plans to relocate a part of Grand Loop Road that takes visitors past Frying Pan Spring. "That area of the road is always buckled up and being repatched and repaired, so we're moving it away from the thermal area," Hottle said.