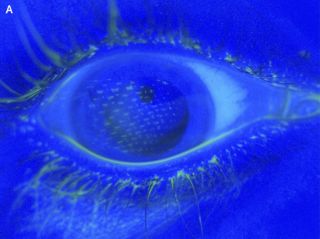 Under a blue light, fluorescein staining of the eye reveals an imprint of the nylon mesh pattern of the airbag cover on the corneal surface of the right eye.
(Image: © The New England Journal of Medicine ©2014.)

A teen girl involved in a car accident in Michigan didn't even have time to blink before the airbag deployed, and the bag left an imprint of its canvas on her eyes, according to a new report of the case.

The case should remind people that airbags can directly strike the eyes, experts said.

The 17-year-old girl was sitting in the front passenger seat when the car she was in rear-ended another car in front of it, and went to the emergency room feeling pain and burning in her eyes. To examine her eyes, doctors used a special florescent dye that highlights any scratches or tearing of the cornea, or eye's surface layer, when a blue light is shone on it.

"When we looked at her under a magnified view, we could see that there was this very unusual imprint on the surface of the cornea … a rather dramatic-looking picture of the imprint of the nylon mesh pattern of the airbag cover," said Dr. Jonathan Trobe, an ophthalmologist at the University of Michigan Kellogg Eye Center, in Ann Arbor. [Image of the girl's eye]

"It's quite interesting to see that the airbag deployed so quickly that she didn't have time to close her eyes," Trobe told Live Science. [16 Oddest Medical Cases]

Besides leaving an imprint on one eye, the airbag also tore the surface of the other eye, but the injuries healed in 24 hours. The girl also had a small amount of bleeding in the eye, which resolved in two weeks, according to the report published June 25 in the New England Journal of Medicine.

Although airbags can prevent head trauma and save lives, they have sometimes caused severe eye injuries, doctors say.

"I have seen this a lot," said Dr. Jules Winokur, an ophthalmologist at Lenox Hill Hospital in New York City, who wasn't involved with the case. "Actually, this case report is a really mild case of the damage that airbags can do."

Even with eyes closed at the time of impact, the force of an airbag can cause nerve problems, make the retina detach or rip apart eye tissue, sometimes with life-long consequences.

"I was just involved, over the weekend, on a patient here in the hospital who was in a car accident with an airbag injury, and now is completely blind in one eye," Winokur said.

The doctor said his father also sustained serious eye injury from an airbag. After the accident, Winokur's father developed glaucoma and a cataract, and needed surgery. "Even to this date, he doesn't see well out of an eye because of the accident," Winokur said.

Still, most eye injuries from airbags are mild and temporary, and the outcome is probably better than the alternative, doctors say. Without an airbag, injuries can range from broken facial bones and eye damage, to head trauma and death.

"The thing to keep in mind here is that if you didn't have the airbag and hit your head, it would be much worse," Trobe said. "This is almost like an exchange. This is a little bit of small price to pay."