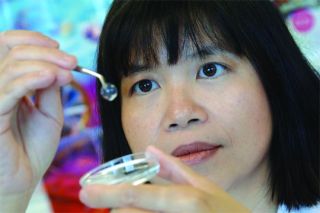 Dr. May Griffith displays a biosynthetic cornea grown in the lab to be implanted into the eye to repair damage and restore sight.
(Image: © Ottawa Hospital Research Institute.)

Cornea implants grown in the lab can restore vision to the blind, according to early clinical trial results released today.

The trial, which took place in Sweden, consisted of 10 adults with blindness from disease or damage to the cornea, the transparent outer covering of the eye. During a two-year follow-up period, six of the 10 patients who received the implant saw their vision improve. In all cases, the body accepted the new cornea implant, repopulating it with living cells and nerve fibers.

"This study is important because it is the first to show that an artificially fabricated cornea can integrate with the human eye and stimulate regeneration," senior researcher Dr. May Griffith, of the Ottawa Hospital Research Institute, the University of Ottawa and Linköping University in Sweden, said in a statement. "With further research, this approach could help restore sight to millions of people who are waiting for a donated human cornea for transplantation."

Corneal disease and damage are among the leading causes of blindness worldwide. More than 40,000 corneal transplants occur each year in the United States, according to the Eye Bank Association of America. However, there is a worldwide shortage of donated human corneas. Current synthetic cornea replacements carry a high risk of complications and are only approved for use after multiple human-tissue transplants have failed.

The new corneal implant is "biosynthetic," meaning it is created by a living organism, in this case, yeast. To make the implant, researchers at the San Francisco-based company Fibrogen Inc. genetically engineered yeast to produce collagen, the protein that makes up much of the cornea. The research team then molded the collagen into a contact-lens shape and surgically implanted it in one eye of each of 10 volunteers, who had either advanced keratoconus (a bulging of the cornea) or central corneal scarring. Once implanted, the collagen acted as a scaffold for the eye's own cells. Like vines on a trellis, the cells began to grow on the collagen matrix, essentially recreating the cornea.

Over a two-year follow-up period, the cells completely populated the corneal implant, the researchers report today in the journal Science Translational Medicine. The tissue became sensitive to touch and was covered with a thin film of protective tears, just like a healthy cornea. Because their new corneas were populated with their own cells, the patients didn't have to take immune-suppressing drugs to prevent rejection like most organ recipients.

While six patients showed improved vision, two others saw no change and two had their vision get worse. After surgery, the patients averaged 20/110 vision with glasses. Roughly, that means they had to stand at a distance of 20 feet (6 meters) to read something that someone with normal, 20/20 vision would be able to read at 110 feet (36 meters).

Those numbers couldn't compete with the average eyesight of recipients of human cornea implants, which is 20/43. However, when the patients in the trial wore rigid contact lenses, their vision improved to 20/42, effectively matching the human-cornea results.

The implanted corneas were not completely smooth and so the hard contacts forced the corneas to conform to an even surface, improving the ability to focus.

The irregularity was likely the result of the sutures used to hold the implant in place during healing, the researchers wrote. In future trials, they plan to use suture-free methods and a stronger implant.

The corneal implants still have years of testing ahead before they become widely available. Larger patient populations and longer-term studies are necessary to be sure that the implant is safe and that it works. Nonetheless, the researchers say they are optimistic about the implant.

"We are very encouraged by these results and by the great potential of biosynthetic corneas," said eye surgeon Per Fagerholm of Linköping University, who was part of the research team. "New studies are being planned that will extend the use of the biosynthetic cornea to a wider range of sight-threatening conditions."