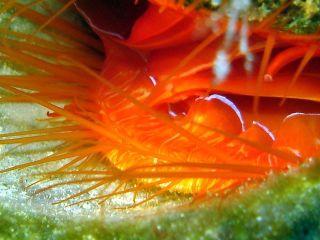 Many sea creatures, from plankton to octopuses, are capable of producing similar light displays using bioluminescence — a phenomenon that occurs when chemical energy from the animal is released as light. Bioluminescent animals have a special compound that reacts with oxygen, which can emit light even in total darkness. Disco clams do not have this compound. Instead, their tiny silica mirrors reflect light like a disco ball. [See video of the disco clams' light shows]

The small silica spheres line the inside lip of the disco clam's mantle — an outer layer of protective muscle and tissue. These microscopic spheres measure no more than 340 nanometers across. For comparison, a sheet of standard copier paper is 100,000 nanometers thick.

Study researcher Lindsey Dougherty, a graduate student at the University of California, Berkeley, used a spectrometer to measure the light emitted by the clams and discovered that the silica spheres are especially good at reflecting the short wavelengths of blue light, which can reach deep-sea water easier than longer wavelengths of light.

The outside of the clam's lips do not have any silica spheres and are especially good at absorbing the blue light. The absorption makes the outside of the lips appear very dark, the researchers said. The clams unfurl their lips twice every second and the rapid flipping between the light and dark side of the lips creates a rippling effect.

But the researchers are still unsure why the disco clams put on their spectacular light display, Dougherty said in a statement. She is now studying the species to determine if the flashing behavior is designed to attract the tiny plankton it feeds on, or if it is used to scare away predators or attract a mate.

Each clam has 40 eyes, but researchers don't know if the clams can even see the flashing lights they emit. Dougherty is also testing to see if the clams use the ripples of light to communicate with each other.

The clams live in tropical regions of the Pacific Ocean and typically live in reef crevices on the ocean floor, 10 feet to 150 feet (3 meters to 46 meters) deep. Details of the discovery are published in the June 25 edition of the Journal of the Royal Society Interface.