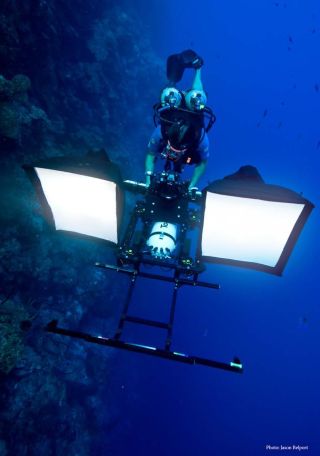 Forget the twinkling stars in the night sky. The true glowing beauties are hundreds of feet beneath the surface of the ocean: Tiny biofluorescent and bioluminescent organisms inhabiting the coral reefs of the world's great oceans.

After rainforests, coral reefs are the second most diverse type of ecosystem on Earth, with species, many undiscovered, that are not only beautiful, but also useful to modern day biological and medical research.

Bioluminescent light occurs because of a protein called green fluorescent protein, or GFP. In fact, in 2008, the Nobel Prize for Chemistry went to a group of researchers who discovered and developed uses for GFP from bioluminescent jellyfish, Aequorea victoria. The Acropora in the accompanying image expresses GFP, hence the green glow when exposed to blue light.

GFP is invaluable as a marker. Cells or molecules tagged with the protein will glow when researchers use fluorescence microscopy. The technique allows scientists to track biological processes that are usually invisible, such as the spreading of cancer cells, viral entry into a cell, or the mechanisms behind nerve cell damage in the brain of a patient afflicted with Alzheimer's disease.

By better understanding those processes, scientists can target specific areas and thereby discover cures. GFP is also much less toxic than other small fluorescent molecules when used to visualize living cells. The discovery of GFP has revolutionized the field of cellular bioimaging.

With support from the National Science Foundation, David Gruber of the City University of New York, Baruch College, and his collaborators found GFP in many species of corals and other sea organisms. They also discovered one of the brightest fluorescent proteins, and a region of the molecule that evolves divergently. Gruber and his team are currently looking into the protein's presence in fish; a project in collaboration with John Sparks, curator of ichthyology at the American Museum of Natural History in New York City.

To conduct their research, Gruber and his collaborators dive more than 300 feet (100 meters) below the ocean's surface, nearly 200 feet (60 meters) more than most scuba divers, using innovative high-resolution technology to capture the deep ocean organisms in action, despite low light levels. Diving in tropical locations such as Australia's Great Barrier Reef and the Cayman Islands, once submerged, the team has only 20 to 30 minutes to collect as many samples as possible, sometimes even in the presence of sharks.

The researchers have collected around one hundred coral and anemone specimens so far, and these are in storage at the museum. The team is currently cloning the novel fluorescent proteins from those specimens to investigate whether they are useful markers in bioimaging.

Gruber and his colleagues are also developing a Remote Operated Vehicle to facilitate deep coral reef exploration (ranging more than 100 feet (30 meters) deep) and record the biodiversity of coral and sponge populations.

To learn more, take a look at American Museum of Natural History's Science Bulletins, where Gruber regularly updates visitors on his research. "Aglow in The Dark: The Revolutionary Science of Biofluorescence," (Harvard University Press, 2007) a book co-authored by Gruber with Yale neuroscientist, Vincent Pieribone, is also available and will soon become an IMAX film through the National Film Board of Canada.