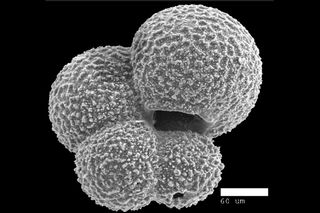 A near-microscopic fossil foraminifera (a kind of plankton) used to reconstruct ancient environmental conditions. The 60 microns (µm) scale bar is approximately the diameter of a grain of pollen.
(Image: © Images by Scott McCallum and Scott Ishman)

Some of the biggest questions facing science today ask how climate, the oceans and the Earth's ecosystems will change in the future. To predict what's going to come, scientists need a long-term view of past environmental conditions to provide context, a baseline and maybe even analogs for future global change. But how do we learn about the distant past, when we don't have man-made records?

One innovative solution: paleo proxies, or chemical and physical features preserved in the fossil record that contain evidence of ancient environments. Among the most common proxies used to study prehistoric climate and ocean conditions are foraminifera, or "forams" for short. Forams are a kind of plankton that have existed for millions of years, living in a wide range of marine environments. Their shells, commonly carbonate, record the chemistry of the ocean as they grow. This means that the information contained in fossil foram shells has the potential to reveal for certain time periods what the temperature of the ocean was, how much ice was on land, how the oceans were circulating and how acidic the ocean was — which points directly to the CO2 concentration of the atmosphere.

To use fossil forams as proxies, a precise understanding is needed of the relationships between foram shells and environmental factors such as temperature and acidity. That's where Howie Spero and the foraminifera culturing program come in.

In 1975, the National Science Foundation funded two researchers from Columbia University's Lamont-Doherty Earth Observatoryto collect and grow (or culture) live forams in the lab for the first time. Spero joined them as a research assistant in 1979, and continued working with live forams throughout his PhD research. In 1989, he received an NSF grant to carry on this work at the Wrigley Marine Science Centeron Santa Catalina Island, Calif., and his UC-Davis research group has been culturing forams with NSF support ever since.

Culturing in the lab allows Spero and his team to manipulate the physical and chemical conditions under which forams grow and then observe the relationships between those conditions and the chemical make-up of foram shells. The relationships observed in the present-day lab can be used to develop a more refined, mathematical understanding of what fossil forams indicate about ancient environments. This practice is called "calibrating" paleo proxy relationships.

Over the years, the foram culturing program has led to a series of calibration breakthroughs that have helped to propel paleo proxy research to the cutting edge of modern science. The first Mg/Ca "paleothermometer," for instance — in which the ratio between magnesium and calcium in fossil foram shells is used to compute the ocean's temperature — was developed and calibrated by Spero and his team. They conducted the first experiments to determine the relationships between trace elements in foram shells (e.g., barium, cadmium, uranium, boron) and ocean conditions such as salinity, alkalinity, nutrients and pH. And they haven't just developed paleo proxy relationships in the lab: They've also applied them to the fossil record, linking past changes in tropical and subtropical environments to shifts in ocean circulation during glacial cycles and abrupt climate change events.

What's next for the foram culturing program? Its latest projects include investigating the mechanisms of shell formation and using new techniques to understand extremely fine-scale chemical variations within shells (across microns, or thousandths of a millimeter). Spero and his team are also expanding the paleothermometry toolbox to include the use of variant forms of oxygen atoms (or isotopes) in different species of forams.

As their work on present-day forams reveals more about the past, the past may reveal more about the present state of the ocean-climate system — and what's to come in the future.