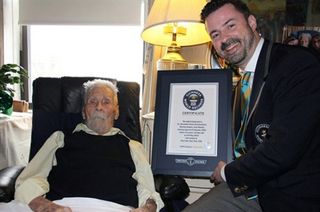 Imich, a parapsychologist and retired chemist, was 111 years and 93 days when he was awarded the title of oldest living man on May 8. He was living on the Upper West Side of New York at the time of his death.

"While his own longevity surprised even himself, he credited his life to good genes and an overall moderate, healthy lifestyle by which he has eaten very leanly his entire life," according to Guinness World Records. [The World's 7 Weirdest World Records]

Imich was born on Feb. 4, 1903, in what is now Częstochowa, Poland (then part of the Russian Empire). He immigrated to the United States from the Soviet Union with his wife, Wela, in 1951, and has lived alone in Manhattan since she died in 1986, according to Guinness World Records.

Imich's motto was that one should "always pursue what one loves and is passionate about," he told Guinness World Records.

Misao Okawa of Osaka, Japan, age 116, holds the title of world's oldest living person and oldest woman. The greatest age to which any human has lived that could be authenticated by Guinness World Records was 122 years and 164 days, attained by Louise Calment of France, who died in 1997.