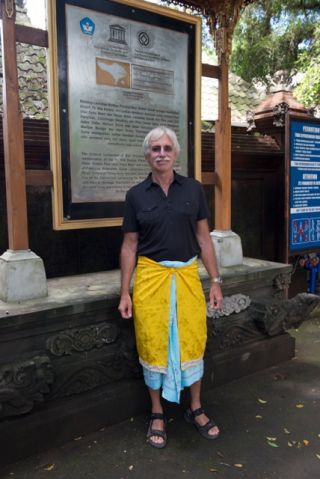 On the volcanic island of Bali, rice farmers have evolved an approach to their livelihoods that blends religion, ecological knowledge and an egalitarian water-distribution system that for centuries sustained rice harvests on both mountain terraces and flat lands. This cooperative farming system, known as subak, dates to the 11th century and represents profound historical knowledge of the workings of Bali’s agricultural ecosystem, including how to deal with crop pests. With support from the National Science Foundation, anthropologist Steve Lansing used computer simulations to show that the Balinese subaks are a real-world example of a complex adaptive system, in which the optimal harvests for hundreds of subaks emerge from local cooperative interactions. [Planting the Seed of Sustainable Farming: Op-Ed ]

Lansing has been studying subaks since the 1970s. During the so-called "Green Revolution" of the same decade, the subaks became compromised. Hoping to increase rice yields, farmers were told to plant as often as possible, and set aside their traditional system of cooperative irrigation scheduling. But within a year or two, farmers saw a devastating increase in pestilence and water shortages.

In the late 1980s, using observational data and computer simulations, Lansing studied the emergence of the subak system, which has rice paddies become active and go fallow in concert, so there is a period during which pests starve and die off. His results showed that the subak system was far more effective than the Green Revolution approaches, and helped prompt a return to the traditional methods.

Bali’s natural landscape and its subaks are still stressed, however, by factors including increasing urbanization and a growing tourism trade. In 2012, Lansing’s research was used to win recognition for the subaks as a UNESCO World Heritage site. Now he is working with Julia Watson, an assistant professor of architecture at the Rensselaer Polytechnic Institute in New York, to design a sustainable World Heritage destination that will preserve the culture , benefit the people of Bali and serve as a model for other World Heritage cultural landscapes.

Lansing is director of the Complexity Institute at Nanyang Technological University. He also is an external professor at the Santa Fe Institute, professor Emeritus at the University of Arizona and senior fellow at the Stockholm Resilience Centre, which advances research on the governance of social-ecological systems (such as the subaks), with a special emphasis on resilience. He is author of many books, including Perfect Order: Recognizing Complexity in Bali, Priests and Programmers: Technologies of Power in the Engineered Landscape of Bali, The Balinese and The Three Worlds of Bali.

In the following video, Lansing answers our 10 questions.