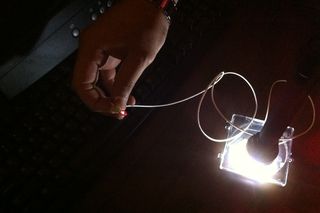 Leah Markum is an intern at the University of Arkansas. She contributed this article to LiveScience's Expert Voices: Op-Ed & Insights.

Cufflink-sized solar cells have a limited capacity to generate electricity because of their lower photocurrent (associated with their smaller short-circuit currents and size). However, by coating tiny cells with a thin layer of zinc oxide, engineering researchers at the University of Arkansas have achieved a record for energy conversion for such devices.

Each cell is a square only 9 millimeters (0.35 inches) on a side, and yet the cells can achieve an efficiency of 14 percent, the highest for small gallium-arsenide solar cells. Silicon solar cells of the same size produce 8 percent efficiency. While the record conversion efficiency for any solar cell is over 44 percent, those cells must be large. By comparison, a motor vehicle utilizes 15 percent to 25 percent of the thermal energy generated by gasoline and algae photosynthesis averages 5 percent — so in context, 14 percent efficiency is good.

A small array of the new cells — as few as 9 to 12 — generates enough energy for small light-emitting diodes and other devices. But by scaling up surface modifications and packaging the cells in large arrays of panels, the devices could theoretically power large devices such as homes, satellites or even spacecraft.

The research team that designed and created the cells, led by electrical engineering professor Omar Manasreh, published its findings in Applied Physics Letters and the April 2014 issue of Solar Energy Materials and Solar Cells.

The surface modification — a chemical synthesis of thin films, nanostructures and nanoparticles — suppressed the sun's reflection so the cells could absorb more light. But even without the surface coating, the researchers were still able to coax the host material to reach 9 percent efficiency.

"We want to increase the efficiency of small cells," said Yahia Makableh, an electrical engineering doctoral student with the research team. "With this specific material, the theoretical maximum is 33 percent efficiency, so we have some work to do. But we're making progress. The beauty of zinc oxide is that it's cheap, non-toxic and easy to synthesize."

Makableh said the surface modification could also be applied to other solar cells, including those made of indium-arsenide and gallium-arsenide quantum dots. Solar cells made of those materials may reach 63 percent conversion efficiency, which would make them ideal for future solar cell development.

Manasreh directs the Optoelectronics Research Lab, where Makableh used equipment and instrumentation for the cells' design and construction. Researchers in the lab grow and functionalize semiconductors, nanostructured anti-reflection coatings, self-cleaning surfaces and metallic nanoparticles to be used in solar cells. Ultimately they intend to fabricate and test photovoltaic devices with greater solar-energy conversion efficiency.

Manasreh focuses on experimental and theoretical optoelectronic properties of semiconductors, superlattices, nanostructures and related devices. Since joining the University of Arkansas in 2003, he has received more than $8 million in public research funding from the National Aeronautics and Space Administration, the U.S. Air Force and the National Science Foundation.