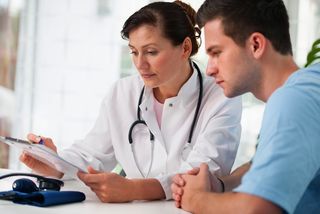 Most people who have an HPV infection of the mouth are men, research shows.
(Image: © Young man with his doctor photo via Shutterstock)

CHICAGO — The majority of people who have infections of human papillomaviruses (HPVs) in their mouths are men, a new study suggests.

The researchers looked at more than 9,000 U.S. men and women who tested positive for an oral HPV infection, and found that 78 percent of them were men.

When the researchers looked at the types of HPV that are linked to cancer, they found that 82 percent of people who tested positive for this risky group of viruses were men, according to the study presented here today (June 1) at the annual meeting of the American Society for Clinical Oncology.

The researchers also looked at racial backgrounds and ethnicities of the people with high-risk, oral HPV infections and found that 61 percent were white, 12 percent were black, and about 15 percent were Hispanic. [Quiz: Test Your STD Smarts]

HPVs are a group of more than 150 related viruses that infect different parts of the body, including the genital areas of men and women, as well as the mouth and throat. Most cases of HPV infection are harmless and resolve on their own. However, sometimes HPVs can cause health problems, such as genital warts, and certain HPV types are linked to cancer, for example cervical and penile cancer, as well as throat cancer, according to the National Cancer Institute.

Researchers estimate that 79 million Americans are currently infected with HPV, but some studies have suggested as many as two-thirds of healthy Americans have an HPV infection on some part of their body, including the skin, mouth, genitals or intestines.

HPV is so common that most sexually-active men and women will get at least one type of HPV at some point in their lives, according to the Centers for Disease Control and Prevention (CDC).

There are vaccines recommended for teenage boys and girls to protect against the common strains of HPV. Also, routine screening with pap smears is recommended for women ages 21 to 69 to prevent cervical cancer, according to the CDC.

In the new study, the researchers used data from National Health and Nutrition Examination Survey gathered between 1999 and 2012 from a nationally representative sample of people.

The researchers looked for infection with 22 strains of high-risk HPV. For all of these strains, men had a higher prevalence than women, the researchers said.