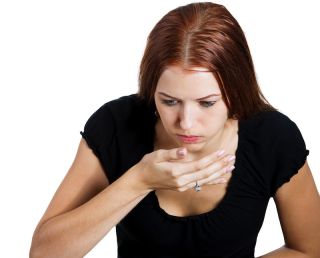 It's not unusual for a person with seasonal allergies to have an itchy nose and itchy eyes. But it may seem surprising that some hay-fever sufferers get an itchy feeling in their mouths, throats and lips when they start to eat certain foods.

Not long after some people with seasonal allergies eat uncooked fruits and raw vegetables, as well as some nuts and spices, these people's immune systems recognize a similarity between the food and pollen's proteins. This is called cross reactivity.

"The thinking in the field is that the pollen allergy is the driver behind the immune response to the food," said Dr. Wayne Shreffler, director of the Food Allergy Center at MassGeneral Hospital for Children in Boston.

Here are his tips for people with hay fever who may experience oral allergy syndrome.

Shreffler said apples, peaches, plums, cherries, nectarines, hazelnuts, almonds and carrots are the most common food culprits of oral allergy symptoms that he sees in his Boston allergy clinic. He noted that apples are a common offender for people who are allergic to birch pollen, as well as foods such as celery, pears and other raw fruits containing pits, because these fruits and vegetables are botanically close to birch. Often, it's just one or two foods on the list that might cause oral symptoms in some individuals with birch pollen allergies.

Melons — cantaloupe, honeydew or watermelon — along with cucumber, zucchini, kiwi and banana, might trigger cross reactions in people who are sensitive to ragweed pollen. And people with grass pollen allergies might be bothered by tomatoes, melons and oranges.

Be aware of common symptoms

Oral symptoms, such as itching and tingling in the mouth and throat, and slight swelling in the lips, can occur within seconds or minutes of putting the food in the mouth. "It's quite an immediate reaction," Shreffler said. Some people may get so much swelling of the mouth, tongue and lips that swallowing might be uncomfortable, he said.

Realize that some hay fever sufferers are not affected

OAS is "pretty common" in people with seasonal allergies, Shreffler told Live Science. "We really don't know why it affects some people with pollen allergies and not others," he added.

For some people, symptoms might occur only during their pollen allergy season, and they might be able to eat the food at other times of the year without any reactions. But for others, the offending food can trigger symptoms year-round, whether it's pollen season or not.

"Usually, symptoms are short-lived," Shreffler said, and they might go away after a few minutes, or persist for an hour. "If you have an itchy mouth after eating a food, pay attention to this," he said. Stop eating the food, and take an antihistamine to relieve the itchiness, Shreffler advised. [8 Strange Signs You're Having an Allergic Reaction]

Try other forms of the food

Someone with a birch pollen allergy might get oral allergy symptoms from a fresh apple, but likely won't have any reaction to applesauce or apple juice, Shreffler said. That's because the food's allergy-causing protein is easily broken down by cooking or processing. Peeling the fruit or vegetable may be helpful because the allergen tends to be concentrated under the skin. Eating canned or frozen forms of the food might also be well tolerated. "It really varies," Shreffler said.

Oral allergy syndrome can occur in kids as young as 3 or 4, but people can also develop the sensitivity for the first time as adults. "If you think you are experiencing oral symptoms, see your allergist, who can help you sort it out," Shreffler advised. "We have specific tests to recognize whether it's oral allergy syndrome or another kind of food allergy."