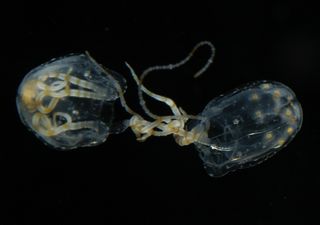 A pair of jellyfish, Copula sivickisi, mating. In this cuboza species, the male (right) drags a female (left) through the water before pulling her in close and using his tentacles to pass a sperm packet to her tentacles. She then eats that sperm.
(Image: © Image courtesy of Alvaro E. Migotto, University of São Paulo)

With their gelatinous bodies, strandlike tentacles and other strange features, jellyfish appear to be very different from other types of animals. But are their mating behaviors also bizarre?

There are almost 4,000 species of jellyfish, according to Cheryl Lewis Ames, a jellyfish researcher at the University of Maryland, College Park. Some of these species are considered jellyfish, despite never taking the "medusa" form (free-swimming gelatinous body with tentacles) often associated with jellies.

The ones that do develop into medusae fall into one of three classes: scyphozoa, or "true jellyfish," which includes the moon jelly; hydrozoa, which includes the Portuguese man o' war; and cubozoa, also known as box jellyfish. [Read more tales of animal sex]

For the most part, medusa jellyfish swim around in blooms or swarms made up of numerous individuals. When it's time to mate, the majority of the medusa species have a similar, unromantic way of going about things: The males release their sperm into the water en masse through a single orifice, which serves as a mouth, anus and reproductive channel, on the underside of their bells. "They create a swamp of reproductive material," Ames told Live Science. [See Stunning Photos of Jellyfish Blooms]

Females then take up the sperm. In some species, females have egg-containing brood pouches near their orifice — the eggs become fertilized as the female swims through the sperm. In other species, the females eat the sperm to internally fertilize their eggs.

In 2005, Ames and her colleagues reported in the journal Marine Biology that they had discovered one cubozoa species, Copula sivickisi, has a very different mating tactic, which involves a courtship dance. In this species, a male will use his tentacles to grab a female's tentacles; he will then drag her around for a while before pulling her in close to him. Next, he will produce and release a spermatophore (sperm packet), and use his tentacles to pass it to one of the female's tentacles. The pair splits, and the female eats the sperm packet.

Soon after, they go on to mate with other adults. C. sivickisi females become unresponsive and stop mating once their stomachs are full of sperm; males, on the other hand, stop mating when their four pairs of testes are empty of sperm, Ames said.

Fully developed jellyfish embryos will hatch to become free-swimming larvae called planulae. From there, a couple of different things can happen. In some species, the planulae develop into adult madusae. In C. sivickisi and many other species, the planulae swim down and attach themselves onto a solid substrate, becoming cylindrical, stalklike polyps.

Sometimes, the sessile polyps will grow into individual medusae. Other times, the polyps reproduce again, this time asexually, by budding, or producing a clonal outgrowth on its side.

Sometimes, the bud will become a polyp clone that also attaches itself to the substrate. Other times, the outgrowth will develop into a baby jellyfish called an ephyra, which grows up to become a medusa.