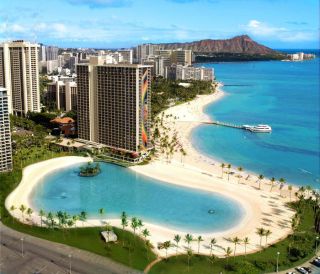 And the best beach of 2014 is ... Duke Kahanamoku Beach on Oahu, Hawaii. This beach is protected by a reef from big waves.
(Image: © Stephen Leatherman)

The Hawaiian island of Oahu took first prize for the best beach of the year, thanks to the new smoke-free policy at Duke Kahanamoku Beach in Waikiki.

Named after an Olympic gold medalist in swimming, the beach is artificial and protected from large waves by a small reef, said Stephen Leatherman, a coastal scientist at Florida International University. Leatherman, who goes by the nickname "Dr. Beach," ranks U.S. beaches every year, taking into account sand, surf and safety. Duke Kahanamoku beach clinched the No. 1 spot because of Oahu's new policy banning cigarettes on its beaches.

"When I go to the beach, I go there for nature, and, of course, recreation," Leatherman told Live Science. "And I hate to put my hands down on the beach and touch a cigarette butt. It's just disgusting."

Cigarette butts are also the No. 1 form of beach litter in the United States by numbers (by volume, it's plastic), so banning smokes helps make for a cleaner environment, Leatherman said. [See photos of the full top 10 beaches list]

Fun in the sun

Hawaii and Florida dominate the list, with a few appearances by the Carolinas and one in Massachusetts. Leatherman focuses on swimming-friendly beaches that are easily accessible and have lifeguards on duty; for sheer beauty, he says, the rugged beaches of Oregon can't be beat, but the water there is cold and rough, and you need to take a long hike to get to many of the most beautiful spots.

Among the Florida honorees is the No. 2-ranking Barefoot Beach Preserve County Park in Bonita Springs. This site boasts gentle surf, shallow water and fine sand, Leatherman explained. The No. 3 spot also goes to Florida's St. George Island State Park, where the sand is "squeaky clean" — though you'll want to shuffle your feet as you enter the water to scare up any snoozing stingrays.

Cape Florida State Park in Key Biscayne snags the No. 7 spot for its gentle surf and clear waters. Another Florida beach, Delnor-Wiggins Pass State Park in Naples, comes in at No. 10. Hawaii gets two more nods, with the No. 4 beach, Waimanalo Bay State Park on Oahu, and No. 5, Hamoa Beach, a gorgeous crescent of sand surrounded by lush vegetation on Maui.

"Florida and Hawaii do dominate, because they have the warm water. They have the beach weather," Leatherman said.

South Carolina, North Carolina and the northeast all have their charms, too, however. Last year, Leatherman dubbed Main Beach at East Hampton, New York, the best beach in the country. (The winning beach is "retired" from future competitions.) This year, he ranked Coast Guard Beach on Cape Cod, Massachusetts, No. 8. The water at this site is nippy, but the views of the old Coast Guard station on the bluffs over the beach are beautiful, Leatherman said.

Beachwalker Park on South Carolina's Kiawah Island gets a nod at No. 9. Most of Kiawah Island is expensive private property, Leatherman said, but this beautiful spot on the southern end of the island remains publically accessible. Starting at this beach, visitors can bring a bike and circumnavigate the entire island, riding on its fine-grained, packed sand. Canoes and kayaks are also good options to navigate tidal inlets filled with thousands of birds.

"This is a real great place to explore," Leatherman said.

Lastly, another Carolina comes in No. 6 on the list. Cape Hatteras on the Outer Banks of North Carolina is so far from the mainland that the shore of the continental United States isn't visible, Leatherman said. The picturesque Cape Hatteras lighthouse sets the scene, and the fishing is great, he added. Families with young children should hit Cape Hatteras earlier in the season, Leatherman warned, as rough waves and riptides become more common in late summer when tropical storms in the Atlantic heat up.

Editor's Note: If you have an amazing beach photo you'd like to share for a possible story or image gallery, please contact managing editor Jeanna Bryner at LSphotos@livescience.com.