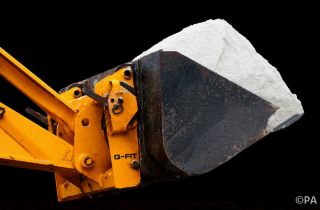 Icy winters and arid summers are creating salty soil. In some regions, increasing aridity concentrates naturally occurring salt in the soil, while in others, rising seawater has contaminated the groundwater with sea salt. New research suggests plants are riding a calcium wave just to survive in the increasingly salty, or saline, soils that have become a problem the world over.

Humans have contributed to increased soil salinity, as land and water use alters water tables, and human-influenced climate change shifts rainfall and air temperature patterns. While it seems counter-intuitive, even field irrigation increases soil salinity. All water applied to the soil contains some salt. As plants are unable to absorb salt, once evaporation removes the water the plant cannot use what is left is the salt, which builds up over time.

These roots weren’t made for walking

During icy winters, salt is flung onto the ground in ever increasing quantities to manage snow and ice. Over the past 50 years the application of salt on roads and walkways has increased dramatically: in 1960, around three million tonnes of salt were spread on North American roads; today, that figure is 20 million tonnes.

Come spring, rain runoff carries salt from the road and shoulders onto surrounding soils and into the water table. The cumulative effects of salt application to roadways and walkways are marked. Some freshwater river watersheds have seen salt levels rise between 100% and 250%. And these levels rise every year.

This poses a significant problem as salt is, generally speaking, toxic to plants – as many a school student will have conclusively demonstrated in classroom experiments, and “salting the earth” was a tactic used by victorious armies to punish their foes and make it harder to reinhabit the land.

Rooted to the spot, plants cannot escape the toxic effects of salt, so rising salinity is a serious risk to both crop production, and more widely an entire ecosystem’s health.

Recent research by Won-Gyu Choi and his colleagues, in the laboratory of Simon Gilroy at the University of Wisconsin, has found that calcium plays a key element in plants’ initial response to salt. When plants sense salt they respond by creating a “calcium wave”, an elevated concentration of calcium ions that passes in a ripple from the point of salt perception, throughout the plant. The wave is created by the release of calcium that the plants store within their cells.

The study’s authors used a novel system to observe changes in calcium within plant cells, by engineering plants that would create a protein that fluoresces according to the level of calcium present.

When they exposed plant roots to various stimuli including cold, touch, or stress, the plants generally responded with elevated calcium concentrations at the point of application. When roots sensed salt, calcium rose at the point of contact, followed by neighbouring cells in a continuous wave travelling at two cells per second throughout the plant. The calcium wave travelled from the roots all the way to the tips of the shoots and leaves above ground within two minutes.

Plants get the message

When the plants’ shoots received the signal, they altered what they were doing. In fact, they mounted what might best be described as a defence response. Having received the calcium wave message, plant tissues reconfigured their cellular functions – manufacturing new molecules that help the plant contend with salt, by adjusting water balance within the plant, and setting up barriers to salt invasion of the plant tissues. The authors are certain that it was the calcium wave that created this response by using chemicals that inhibited the passage of calcium.

Won-Gyu Choi and colleagues speculated that the calcium is released from a special compartment within the cell, stored for this purpose. This requires the action of special proteins, which form a pore that opens in order to release calcium from the compartment.

Examining plants where the pore proteins no longer functioned, they found the calcium wave no longer travelled properly through the plant. Without the ability to create this calcium wave transmission, they found those plants were unable to mount a defence against salt. These plants also exhibited poor growth in the presence of salt relative to normal plants.

Won-Gyu Choi and colleagues discovery has revealed an important mechanism that plants use to contend with salty soil. The calcium wave that plants create in their roots to inform the rest of the plant that salty times are ahead has striking similarities to our nervous system.

In humans, calcium is also used to signal from one neuron to another when we experience stress, such as pain. When you get salt in a wound, the signals your brain receives also have a calcium wave element to them, as firing neurons trigger each other in a chain reaction that carries information from peripheral nerves to the brain in a fraction of a second. It turns out plants are using an analogous system to transmit information about salt stress, but rather than being received by a centralised brain, they inform every cell of the plant’s body.

Hopefully, we will be able to use this information in future to help plants alleviate the stress caused by salty soils and better contend with a saline environment – as long as we’re planning to eat plants, or animals that feed on them, we will need to give them all the help we can.

Malcolm Campbell receives funding from the Natural Sciences and Engineering Research Council of Canada and from Genome Canada.