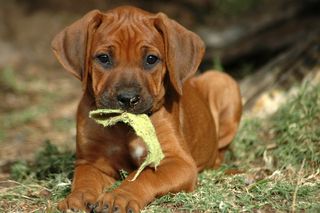 The origins of dog domestication have been difficult to unravel.
(Image: © Anke van Wyk, Shutterstock)

In January, an inspector from the U.S. Department of Agriculture (USDA) found a four-week-old shih tzu puppy lying dead — frozen solid — in the outdoor portion of an enclosure of a puppy mill in Stover, Mo.

Missouri is the state with the notorious distinction of being the hub of the puppy mill industry. On the night the dog apparently succumbed, temperatures overnight had dropped as low as 2 degrees Fahrenheit and there were imprints from the wire flooring across the puppy's body. The inspector noted there were no footprints in the snow to indicate someone might have checked on the outdoor portion of the enclosures that night. A dog not built for a frigid night in the depths of a Missouri winter became yet another casualty of an industry that treats adult females like breeding machines and puppies like a cash crop.

This is just one of the 101 horrific cases highlighted in our annual report, "101 Puppy Mills," that we recently released to start The HSUS's eighth annual Puppy Mill Action Week, a week when we spotlight the harsh truths about puppy mills and the abuses of dogs that occur on a widespread scale within the pet industry.

In this year's report, Missouri dominates, with 22 Missouri dealers making the list of the 101 mills we identified. Kansas is second, followed by Nebraska, Arkansas and Iowa. At least three dealers in this report have supplied dogs to the Hunte Corporation, one of the largest national broker selling puppies to pet stores. Be forewarned that the report is full of unpleasant details. That's the consequence of the industry's general callousness toward animals, along with its commitment to fighting meaningful government and industry humane standards at every turn. [Nearly 100 Animals Rescued from Squalor at Rural Homestead (Op-Ed)]

Here at The HSUS, eliminating puppy mills is a job we take very seriously all year round: Our legislative and regulatory staff works with lawmakers to regulate puppy mills, we conduct investigations and litigation, and we promote public awareness and education. Our Puppy Mill Campaign staff and Animal Rescue team assist local law enforcement to help shut down the most abusive puppy mills. In recent years, we have assisted in rescuing more than 10,000 dogs from approximately 60 puppy mills across the country, including the rescue of 180 animals recently from a mill in Jefferson County, Ark.

But we still have our work cut out for us. Although Prop B in Missouri has helped to shutter more than 600 mills in Missouri alone in the last three years, there still are thousands of mills operating across the United States.

In addition to state laws like Prop B — which, among other things, requires large-scale dog breeding operations to provide dogs with sufficient food, clean water, housing and space, necessary veterinary care, regular exercise and adequate rest between breeding cycles — there are other fronts of action and signs of progress. Last year, the USDA finalized a rule to require dealers who sell large numbers of puppies online to be federally licensed and inspected. When fully implemented, the rule has the potential to double the number of puppy mills nationwide that will be federally regulated.

And, in a tremendously exciting development, nearly 50 local governments in the United States recently have restricted the retail sale of puppy-mill dogs, with more added every month. This past week, the governor of Illinois, Pat Quinn, worked with his allies in the state legislature to introduce a bill to forbid the sale of dogs and cats from pet stores, and to make homeless animals from shelters and rescues available for adoption from pet stores — the first state-level bill of its kind.

The HSUS' report from last year, "A Horrible Hundred" appears to have had an impact as well, with 15 of the named facilities having shut down or having dropped their licenses. We are seeing better reporting in the media on unethical dog breeding, like a recent segment on CNN's Real Sports with Bryant Gumbel, which focused on continuing obstructionist efforts by the American Kennel Club to prevent the improvement of dog breeding throughout the country.

Animal advocates will ultimately succeed in eradicating puppy mills, but only when masses of people stop buying dogs from pet stores or over the Internet, and instead deal only with animal shelters, breed rescues or small, responsible breeders.

We have a long way to go before no dog will die, unloved, after spending a lifetime in a crate because some irresponsible breeder did not care enough to feed or water her, or bring him inside in sub-zero temperatures. But step by step, we are gaining ground. The vast majority of citizens agree that these mills are unacceptable, and the task before us is to organize their voices and to have them speak collectively to drive the reform that is long overdue and that will stop the suffering of countless dogs who deserve better.

Pacelle's most recent Op-Ed was "Halting Drone-Assisted Hunting Before It Takes Off." This article was adapted from "Puppy Mills and 101 Damnations," which first appeared on the HSUS blog A Humane Nation. Follow all of the Expert Voices issues and debates — and become part of the discussion — on Facebook, Twitter and Google +. The views expressed are those of the author and do not necessarily reflect the views of the publisher. This version of the article was originally published on Live Science.