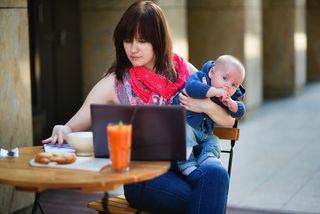 The number of stay-at-home mothers recently rose in the United States after decades of more and more moms working outside the home. But a new analysis of deeper history highlights how much motherhood has changed.

The proportion of working moms in the United States has gone up a whopping 800 percent since 1860, according to a new analysis by Ancestry.com, the genealogy website. In that year, 7.5 percent of mothers were in the workforce, according to the examination of U.S. Census records, compared with 67 percent in the 2010 Census.

The 150-year-long time span allowed Ancestry.com to track the growth of the maternal workforce over time. World War II brought about rapid increases in the percent of employed moms, given the fact that so many men were sent to war. But the biggest annual boost in workforce participation came in 1980, a year that saw a 12.6 percent growth rate for working women and brought the percentage of working moms to 52 percent, Ancestry.com reported. [Top 12 Warrior Moms in History]

A recent study by the Pew Research Center, which looked at a long-running study on Americans' time use, found similar increases in the number of working moms throughout the latter years of the 20th century, but the trend recently reversed, Pew reported in April. The number of stay-at-home moms rose to 29 percent in 2012, Pew found, up from 23 percent in 1999.

That same 2013 study also found that more dads are staying at home, too, though the numbers are small compared with stay-at-home moms: As of 2012, 6 percent of married or cohabiting dads stayed at home with their kids.

The geography of working moms

Ancestry.com also looked at the geographical distribution of working and stay-at-home mothers. The results showed that the South used to have the most working moms, and the Midwest the least. That changed in the last 40 years, and Midwestern states now predominate the top 10 states for working mothers. South Dakota leads the pack with 79.9 percent of moms working, and North Dakota follows with 78.9 percent.

Iowa, Minnesota, Nebraska, Wisconsin and Vermont follow, all with more than 75 percent of moms working outside the home. New Hampshire has 73.5 percent working mothers, followed by Kansas with 73.3 percent and Maine with 71.1 percent.

Overall, the trajectory of working mothers in the United States starts out fairly flat, with slight increases between 1880 and 1940. The curve steepens as more women entered the workforce starting around 1941, and the increase gets even sharper with the women's rights movement of the 1960s.