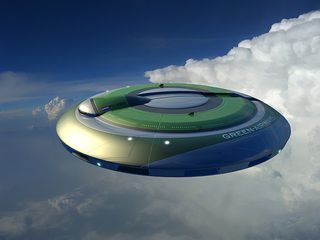 Eco-conscious travelers buy off their global warming guilt with carbon offsets that promote wind farms and reforestation. Meanwhile, aviation engineers are taking another route, designing a more environmentally sustainable airplane that may overturn long-held notions of flight engineering. "I want to get rid of the image of a cylindrical body with wings," said Etnel Straatsma of Delft University of Technology in The Netherlands.

The plane of the future, in Straatsma's vision, might be as wild as a flying saucer. She and other engineers are toying with lighter materials and some are pondering ideas as radical as returning to propeller-driven planes as an eco-friendly alternative to passenger jets.

Straatsma heads the recently-formed CleanEra project, which aims to design an "ultra-eco-friendly plane" that releases 50 percent less carbon dioxide per passenger-mile than current airliners. The project's "greenliner"—depicted in design illustrations as a flying saucer—would also reduce other pollutants and noise, in line with recommendations from the European Aerospace Commission, ACARE. The challenge is that modern airplanes are already close to maximally optimized, said Alexander de Haan, also from Delft but not involved with CleanEra. He has examined various design modifications and found that they could reduce carbon emissions and noise levels by, at most, 10 to 15 percent. "These ideas cannot keep up with the 5 percent growth that the [airline] industry continues to have year after year," de Haan said. Growing concern Aviation accounts for about 2 percent of global carbon dioxide emissions, but what has many worried is how fast the industry is growing. By 2050, air travel could be 5 percent or more of the total warming affect, according to a 1999 report by the Intergovernmental Panel on Climate Change. Although estimates vary, flying in a plane releases the equivalent of about 1 pound of carbon dioxide per mile per passenger, which is about the same as driving a car the same distance. Constant retooling of aircraft has helped to decrease emissions per passenger by 2 to 2.5 percent per year, said Andreas Hardeman of the industry group International Air Transport Association. But he agreed that the current paradigm may have reached the "end of the line." "Ever since the Boeing 707 first flew in 1957, airliners ... have changed very little in their basic appearance," Hardeman said. "However, because future improvements to the basic design are getting harder to make, economic and environmental pressures mean that the case for radical change is getting stronger." Radical change could mean introducing novel materials and shapes, or even reviving "old" propulsion systems. Retro-style propellers One idea is to go back to using propellers, which are more fuel efficient than jets—even when a "jet" (gas turbine) engine is turning the propeller blades. The drawback is that propeller-driven planes are typically slower—something Straatsma finds unacceptable. "One of my requirements is to increase comfort, and we can't do that by making flights longer," she said. Still, there are propeller designs—some with thin, specially-curved blades—that can achieve current airliner speeds of Mach 0.8 (roughly 530 mph). The trouble is that the blades must turn so quickly that the tips create extremely loud shock waves. Straatsma says that her group will look at ways to reduce this noise, perhaps by placing two propellers in a row with contra-rotating (oppositely turning) blades. Scrapping metal Composite materials—plastic reinforced by woven fibers—are another way to go. They can be as strong as metal while weighing less, which reduces fuel use. Boeing recently revealed its 787 Dreamliner, which is 50 percent "plastic" by weight. British low-cost airline easyJet recently revealed the design of a short-haul airliner that will emit 50 percent less carbon dioxide and could be built by 2015. But de Haan believes that composites are simply being swapped in for aluminum. To take full advantage of the new material, engineers will need to "think in composites" from word go.

If a fuselage were made entirely by winding fibers into the desired pattern instead of splicing together metal sheets, "you could reach a 30-percent weight reduction," de Haan said. Besides being lighter, composites offer greater freedom in shaping an airplane, which could benefit aerodynamics. An all-composite plane may not be realizable anytime soon, says Straatsma, since composites are not as heat-resistant as metal, and some of them absorb moisture—a problem especially on the leading edge of the wings. Other alternatives Biofuels could be a way to reduce the carbon footprint of air travel. Some planes are now flying with 30 percent biofuel mixed with kerosene, a common jet fuel. But there are concerns that higher biofuel mixtures might freeze at the sub-zero temperatures at high altitude. Hydrogen fuel might be another option, but it may have to wait for technology that can store this gas in smaller tanks than are currently needed. Another possibility is placing more passengers on a single plane. The so-called blended wing body, in which seating extends out into the wings, could carry 800 passengers. There are worries, though, that people sitting out far from the central axis may get a more wobbly ride. And it's not clear that having planes with this much capacity will work on many routes. Even if these radical changes prove feasible, it may take decades for their full implementation. This is why de Haan advocates also looking into policy and lifestyle changes. However, he does not necessarily think people should cut back on flying. One solution might be to save fuel by shuttling vacationers in a slower, lower-flying aircraft, but then "start the party on board," de Haan suggested. It wouldn't be a flying saucer, but rather a cruise ship in the sky.