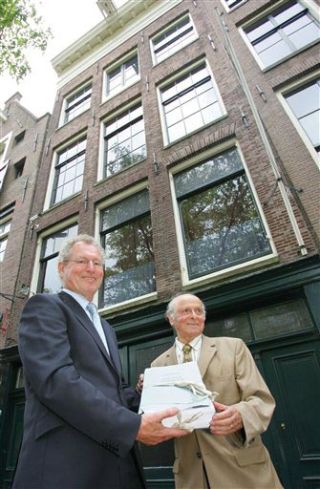 AMSTERDAM, Netherlands (AP) -- Anne Frank's cousin on Monday donated thousands of letters, photographs and documents that archivists say will reveal details about the background of the teenage diarist who became a symbol of the Holocaust.

Bernhard “Buddy'' Elias, 82, had kept the materials for decades in his Swiss attic before permanently loaning them to the Anne Frank House -- the museum incorporating the tiny apartment where the family hid during the Nazi occupation of the Netherlands -- to mark Monday's 60th anniversary of the first publication of The Diary of Anne Frank.

The donation includes Otto Frank's 1945 letter informing his mother in Switzerland that his daughters Anne and Margo and his wife Edith died in Nazi concentration camps, the letter his mother wrote responding to diary excerpts that Otto sent her, and photographs from the late 1890s of the Frank family in their native Frankfurt, Germany.

With Elias' collection, the Amsterdam museum now holds nearly all known historical material about the family, including the postwar years when Otto Frank -- the only survivor -- compiled and promoted the diary.

“This is a very moving moment for me,'' Elias said, handing a thick inventory of the archive to the director of the Anne Frank House, Hans Westra.

The 25,000 documents include material Otto gave to the foundation he started in Basel, Switzerland, in his daughter's memory, and letters from Elias' home in that city, long stored in cupboards and the attic. Otto died in 1980.

The archive has little new information about the 25 months the Frank family and four other Jews hid in the annex of the warehouse where Otto Frank had operated a spice business.

It includes a 1942 business letter to the family in Switzerland from Johannes Kleiman, who was helping to hide the Franks, obliquely hinting they were still alive, archivist Peter Toebak said.

But the collection's value is in understanding the family's cultured background in Germany and the background for the teenager's talent in writing.

“They spoke four languages. They were interested in art, in theater. When they went to a concert or a play, they wrote about it. That's all in these letters,'' Elias told The Associated Press. “My grandmother wrote deep, wonderful poems.''

Otto Frank came from a wealthy Frankfurt family. The archive contains an invitation to his father, Michael, a banker who died in 1909, to attend a function for the Kaiser. Otto and his brother served in the German army during World War I, but after the Nazis began persecuting Jews the family scattered to England, the Netherlands and Switzerland. Elias is the son of Otto's younger sister Leni, who lived in Basel with the family matriarch Alice.

“There's a literary tradition in this family,'' said Toebak, who spent two years putting the papers in order. “They were very close to each other,'' and remained in close contact.

Toebak said the collection may contain some surprises that historians could discover when they begin to delve into the files.

Anne Frank, her parents and sister were arrested in August 1944. Her writings in notebooks and loose sheets of paper were scooped up hours after the arrest by Miep Gies, an employee of Otto Frank's business, who gave them to Otto when he returned after the war.

Anne died of typhus in March 1945 in the Bergen-Belsen concentration camp at age 15, two weeks before the camp was liberated.