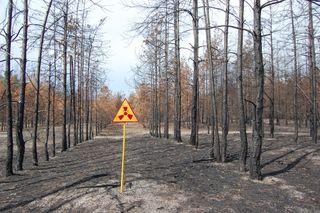 The forests around Chernobyl are still heavily contaminated with radiation from the 1986 Chernobyl nuclear disaster.
(Image: © Sergey Kamshylin / Shutterstock.com)

A massive 32,000-ton, stainless steel arch — so large it could conceal the Statue of Liberty — is being constructed to cover what's left of a nuclear reactor in Chernobyl that exploded in 1986, which triggered a massive radiation leak that has been described as the world's worst nuclear accident to date.

The sarcophagus-type structure, which is scheduled to be ready by 2017, is designed to trap any radioactive dust that may escape into the atmosphere from the former Chernobyl Nuclear Power Plant in Ukraine, reported The New York Times. The enormous cap will also enable workers to complete cleanup operations in the area, which includes safely moving radioactive debris into permanent storage facilities.

"It's an amazing structure," said Nicolas Caille, project director for Novarka, the French company in charge of building the arch, according to the New York Times. "You can't compare it to anything else."

The steel covering is designed to stand for 100 years, and is expected to cost roughly $1.5 billion — a sum that is being financed, in part, by the United States and some 30 other nations, according to The New York Times.

The explosion at the Chernobyl Nuclear Power Plant occurred in the early morning hours of April 26, 1986. Emergency crews battled fires and radiation leaks in the aftermath of the explosion, and residents of the nearby city of Pripyat were evacuated. A total of 31 people died from radiation exposure within three months of the accident, and more than 6,000 cases of thyroid cancer may be linked to the fallout, though direct connections may be impossible to prove.