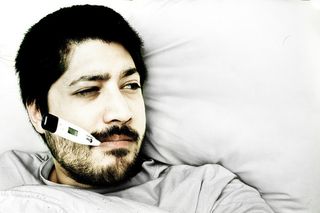 A cold is a mild illness that resolves without treatment. It is a combination of some or all of the following: sneezing, a runny and then blocked nose, a sore or scratchy throat, cough, low-grade fever, headache and malaise. Doctors often refer to a cold as an upper respiratory tract infection or URTI (pronounced er-tee). They are very common – on average, you can expect three per year.

There are at least 200 different viral subtypes that cause colds – the commonest by far are rhinoviruses which are responsible for at least 40%; others include coronaviruses, respiratory syncytial virus (RSV), metapneumovirus and parainfluenza viruses.

Following a cold, the small airways in the lungs become “hyper-reactive”. This can trigger an asthma attack and may result in the so-called “post-viral cough” that lasts for weeks. (In this setting, whooping cough should also be considered).

A cold may be complicated by an ear infection and sinusitis – both of which are usually viral and do not require antibiotics.

By definition, “the flu” is an illness caused by an influenza virus. True flu is much less common than a cold and can be a more severe disease – the nasal symptoms are absent but sore throat may be present. You’re likely to be much sicker and have high fever, chills, shaking, severe muscle aches, malaise, headache and a cough.

Influenza may progress to pneumonia and, in the elderly and those with particular chronic conditions, the risk of death is substantial. When a pandemic strain of influenza appears, the mortality in otherwise healthy people may be significant.

The problem is that many people who have some or all of the symptoms of influenza are not infected with an influenza virus but rather with one of the cold viruses – we call these illnesses “flu-like”. Many people who thought they had influenza in the past will have just had a severe cold (sometimes referred to by female partners as “man flu”).

Occasionally, someone with symptoms of a cold will actually be infected with an influenza virus. To add even more complexity, studies of the 2009 H1N1 influenza pandemic show that the majority of people who were infected had no symptoms.

It is not easy to identify the cause of your cold or flu-like illness. Current diagnostic testing is usually limited to patients who require hospital admission. And even then, we don’t find a definitive answer in most people.

Most colds and flus are transmitted by touching the nasal secretions of an infected person and then touching your own nose or eye. The incubation period is usually one to three days and you are most infectious for about five days from the onset of symptoms.

Flu Attack! How a Virus Invades Your Body

Frequent hand hygiene (washing with soap and water or alcohol-based hand rub) will reduce your risk of infection. Masks, a common sight in Asia, have been shown to be useless at preventing transmission.

The typical cold lasts between three and ten days but 25% persist for more than ten days. The persistence of symptoms often results in people inappropriately seeking antibiotics from their doctor.

You can treat the symptoms of a cold with nasal decongestants and drugs such as aspirin and paracetamol but none shorten the infection.

There are countless unproven claims for herbs, vitamins and minerals in the treatment of colds. In a salutary lesson that “natural” is not always safer, the US Food and Drug Administration in 2009 warned against the use of zinc-containing products in nasal sprays, including homeopathic preparations, because they were associated with a risk of permanent loss of smell.

There is no vaccine for the common cold – it is impossible to make one that can cover so many different viruses. Influenza has a seasonal vaccine that targets the most common subtypes circulating in the community but it is not 100% protective.

The antiviral drugs that work against influenza – Relenza (zanamivir) and Tamiflu (oseltamivir) – reduce the duration of symptoms by just over a day on average.

So, most of us are wrong when we think we have the flu. But if you were to tell the boss that your recent absence was due to “acute coryzal rhinopharyngitis”, you may get more sympathy than by just giving her the cold facts.

Frank Bowden does not work for, consult to, own shares in or receive funding from any company or organisation that would benefit from this article, and has no relevant affiliations.