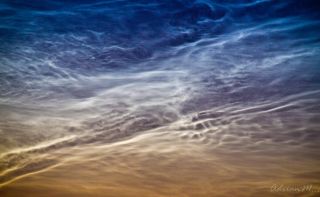 Rare night-shining clouds that glow across the edge of space tend to appear near Earth's poles. But since the turn of the century, these silvery clouds have become more frequent sights over lower latitudes, including southern Canada and the northern United States, new research finds.

Also known as noctilucent clouds, night-shining clouds are the highest clouds in Earth's atmosphere. They hover around 50 miles (80 kilometers) above the surface of the planet — high enough to reflect sunlight long after sunset. The wispy clouds were first officially documented in 1885. Since 2007, scientists have been monitoring the phenomenon near the poles with NASA's Aeronomy of Ice in the Mesosphere (AIM) satellite.

"AIM and other research has shown that in order for the clouds to form, three things are needed: very cold temperatures, water vapor and meteoric dust," study author James Russell, an atmospheric and planetary scientist at Hampton University in Virginia, said in a statement from NASA. "The meteoric dust provides sites that the water vapor can cling to until the cold temperatures cause water ice to form." [In Images: Mysterious Night-Shining Clouds]

The clouds are most commonly spotted from Earth's higher latitudes during the summer months (when the coldest layer of the atmosphere is actually most frigid). But in recent years, there have been more reports of night-shining clouds over midnorthern latitudes, between the 40th and 55th parallels.

Previous studies have suggested that the increase in night-shining clouds could be linked to rocket launches or an increase in methane emissions, thought to boost the abundance of water at the top of Earth's atmosphere.

Russell and his colleagues wanted to check if this increase was linked to any systematic changes in the atmosphere. They modeled the occurrence of noctilucent clouds at lower latitudes from 2002 to 2011 using actual observations of the clouds as well as historical data on water vapor and temperature conditions in the upper reaches of Earth's atmosphere.

The analysis showed that the presence of noctilucent clouds indeed increased during that decade-long span and that high-altitude temperature decreases seemed to be driving the uptick, the researchers concluded in their study in the Journal of Geophysical Research: Atmospheres.

Russell and his colleagues said they would further investigate whether the spike in noctilucent clouds corresponds to a decline in solar activity, as the sun went from solar maximum in 2002 to solar minimum in 2009.

"As the sun goes to solar minimum, the solar heating of the atmosphere decreases, and a cooling trend would be expected," Russell explained in a statement.