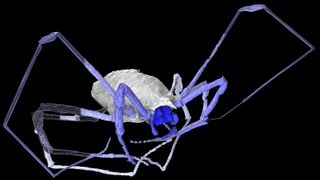 Turns out the ancient ancestors of today's harvestmen had not just one, but two sets of eyes.
(Image: © Paris NHM and Russell Garwood)

The ancient ancestors of today's harvestmen, the spider-like arachnids sometimes called "daddy longlegs," had not just one, but two sets of eyes, a newfound fossil reveals.

The recent discovery of this harvestman fossil in eastern France may shed light on the evolution of these arachnids, which can be found on every continent except Antarctica, the researchers said. [See Video of Ancient Spider-Like Arachnid Revealed In X-Rays]

Using X-ray techniques, the scientists made images of the 305-million-year-old harvestman fossil. It reveals that the two sets of eyes found on the harvestman species Hastocularis argus were separated, with one set located close to the center of the head, and another on the sides of the head.

These ancient arachnids were related to spiders, but were not themselves spiders, the researchers said. "Although they have eight legs, harvestmen are not spiders. They are more closely related to another arachnid, the scorpion," study author Russell Garwood, a paleontologist at the University of Manchester in the United Kingdom, said in a statement. [Images: 4-Eyed Daddy Longlegs Helps Explain Arachnid Evolution]

Today's arachnids, a group of animals that includes not only harvestmen but also spiders and scorpions, can indeed have two sets of eyes, Garwood said. However, modern harvestmen only have one set, located close to the center of the body, he said.

"These findings represent a significant leap in our understanding of the evolution of this group," Garwood said.

The researchers tracked this "lost" set of eyes by examining the genes of modern-day harvestmen embryos, and they found that a remnant of the ancient, additional eye set indeed remains in the modern species' genes.

The skeletons of harvestmen and other organisms that belong to the same group of terrestrial arthropods do not tend to preserve well, making it hard to find their fossils, said study author Prashant Sharma, a postdoctoral researcher at the American Museum of Natural History in New York City.

"As a result, some fundamental questions in the evolutionary history of these organisms remain unsolved," he said.

The findings are published today (April 10) in the journal Current Biology.