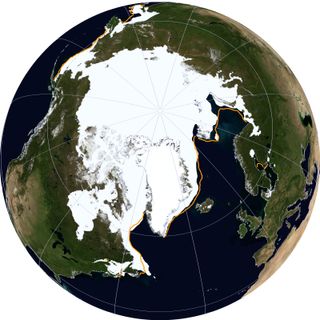 Despite a late-season boost from the cold weather patterns similar to those that blasted England with terrific storms in February, Arctic sea ice is still on a long-term decline, according to the National Snow and Ice Data Center.

But until mid-March, researchers monitoring the icy blanket's annual growth thought the sea ice would be even smaller this year.

This winter, the Arctic ice cover was hovering significantly below long-term averages through the beginning of March, the NSIDC said. But ice pack surged toward the Barents Sea north of Norway and the Bering Sea between Alaska and Russia in mid-March, driven by strong winds. The surface winds were kicked up by an low-pressure weather system in the eastern Arctic and North Atlantic associated with a positive phase of the Arctic Oscillation, the NSIDC said. The Arctic Oscillation is an atmospheric circulation pattern over the northern polar region that affects the jet stream. It causes stormy conditions over the North Atlantic when it is in a positive, low-pressure phase. [Video: Arctic Sea-Ice Continues To Thin]

In the past decade, the Arctic ice-cap extent has bobbed back and forth among top 10 record lows, all the while continuing an overall steady decline that started in the 1970s. Since 1978, the winter Arctic ice cap has shrunk by about 2 percent per decade relative to the 1981-2010 average, according to NASA. The lowest winter maximum on record occurred in 2011, when the sea ice extended 5.65 million square miles (14.63 million square km).

On the other hand, the proportion of so-called multiyear ice was higher this year than in 2013: About 43 percent of this year's ice was more than a year old, compared to only 30 percent last winter. Still, much of that multiyear ice is only two years old, left over from the relatively cool 2013 Arctic summer melt season. Only 7 percent of the multiyear ice is older than 5 years, half of the amount present in February 2007.

Editor's note: This story was updated April 7 to correct the percent decline in the winter Arctic ice maximum.