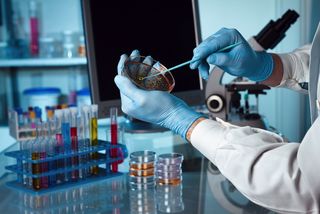 The Defense Advanced Research Projects Agency (DARPA) — the U.S. government agency dedicated to the development of futuristic and cutting-edge technologies for the military — has launched a new division to study the intersection of biology, engineering and computer science, and to investigate how merging these fields could bolster national security.

The new division, dubbed the Biological Technologies Office (BTO), will examine diverse natural mechanisms — ranging from the workings of individual cells to complex biological systems — that, when combined with advancements in sensor design, nanotechnology or microsystems, for example, could yield innovative, next-generation tools for national defense.

"Biology is nature's ultimate innovator, and any agency that hangs its hat on innovation would be foolish not to look to this master of networked complexity for inspiration and solutions," DARPA Director Arati Prabhakar said last week in a testimony before the U.S. House of Representatives Subcommittee on Intelligence, Emerging Threats and Capabilities. [The 10 Coolest DARPA Projects]

The BTO will begin by taking over several projects from DARPA's existing Defense Sciences Office and Microsystems Technology Office, such as a study of human-machine interfaces and prosthetics. As the program evolves, the scope of the division will, too, DARPA officials said.

"The Biological Technologies Office will advance and expand on a number of earlier DARPA programs that made preliminary inroads into the biotechnological frontier," Geoff Ling, the newly appointed director of the BTO, said in a statement. "We've been developing the technological building blocks, we've been analyzing our results, and now we're saying publicly to the research and development community, 'We are ready to start turning the resulting knowledge into practical tools and capabilities.'"

In particular, BTO researchers will focus on developing novel techniques to identify and protect against infectious diseases, which could help mitigate or neutralize biological threats; understanding dynamic interactions within biological systems in order to improve mental and physical health in routine and threatening environments; and investigating ways to make biological engineering safer.

The newly created division is also designed to encourage greater collaboration among scientists across a vast spectrum of disciplines, DARPA officials said.

"Before BTO, DARPA had a handful of biologists, neuroscientists, engineers and the like, interested in synthesizing their work but distributed across different offices," Ling said. "Now we're under one roof, so to speak, and looking to attract a new community of scholars, who will bring a host of new ideas at the intersection of traditional and emerging disciplines."