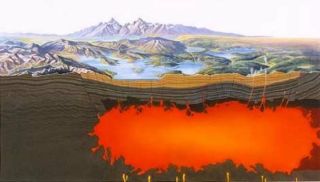 Yellowstone is an active volcano. Surface features such as geysers and hot springs are direct results of the region's underlying volcanism.
(Image: © National Park Service)

The tremor was the largest to hit the famed reserve in 34 years, but that doesn't mean Yellowstone's sleeping supervolcano is getting ready to spew, or even belch, scientists say.

The epicenter of the quake was located 4 miles (6.4 kilometers) north-northeast of Norris Geyser Basin in the northwest corner of Wyoming. The tremor struck at 6:34 a.m. local time and was followed by at least 25 aftershocks in less than two hours, with the largest of magnitude 3.1, according to the U.S. Geological Survey.

Yellowstone is believed to sit over an underground chamber of magma rising from Earth's mantle; the park's much-visited geysers and hot springs are results of this underlying volcanism. The last full-scale blast at the site occurred 640,000 years ago; collapsing ground from that catastrophic event created the oval-shaped, 40- by 25-mile (64- by 40-kilometer) Yellowstone caldera. A smaller, but still major, eruption occurred 70,000 years ago, spilling the lava that made the Pitchstone Plateau. [Image Gallery: Wild Volcanoes]

Scientists monitoring Yellowstone's volcanic and seismic activity say they would expect to see much more rumbling if even a small blast was brewing.

"It’s a pretty high bar to start a volcanic eruption at Yellowstone," said Jake Lowenstern, scientist-in-charge at the Yellowstone Volcano Observatory, an outpost run by the USGS with Yellowstone National Park and the University of Utah.

"To get magma out of the ground you're going to have to have a lot of earthquakes and a lot of ground deformation — a lot more than we're seeing now and much more intense," Lowenstern told Live Science. "There hasn’t been an eruption at Yellowstone in 70,000 years and 500 to 1,000 earthquakes of this size that have happened over that time."

Lowenstern noted that the deadly magnitude-7.3 Hebgen Lake quake, which shook Yellowstone in 1959, caused plenty of changes to the hydrothermal features in the park but no volcanic blasts.

A YVO field team is set to explore the snow-covered area of Norris Geyser Basin where Sunday's quake struck to look for new geyser and hydrothermal activity linked to the shaking. But they don't expect to find much.

"Our real-time temperature data at Norris indicate no significant changes to the thermal features we monitor," Lowenstern said.

Over the past several months, scientists have seen a recent uptick in seismic activity in Yellowstone, which they think is linked to uplift north of the Yellowstone caldera. The same ground previously shifted upwards between 1996 and 2003, and that uplift was similarly associated with an increase in seismicity, according to the YVO.