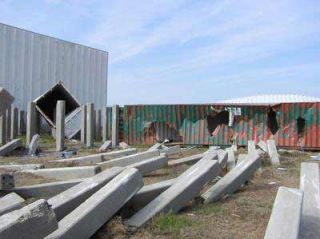 Tractor-trailor containers became projectiles during Hurricane Katrina storm surges. These pre-stressed concrete posts toppled like dominoes when struck by the containers, even though they had been driven into the ground to support the floor of a warehouse that was under construction.
(Image: © Princeton University School of Engineering and Applied Science)

While Hurricane Katrina in 2005 and the Indian Ocean Tsunami of 2004 were fueled by very different forces, they caused damage to structures in surprisingly similar ways, a new study finds.

The study, including a photographic survey of the damage Hurricane Katrina did to the Mississippi coast, showed how the force of water—be it from a tsunami or a hurricane—can lift away buildings or snatch the soil out from under them.

The findings could lead to new design code that would save many lives in such natural disasters.

The majority of the damage to buildings during a hurricane comes not from the storm’s ferocious winds, but from the ocean water those winds rapidly push onshore, called storm surge.

Similarly, the massive waves that can be generated when an ocean or other large body of water is hit by a strong earthquake or volcanic eruption can cause enormous damage as they slam into structures.

Currently, design codes only account for the horizontal force of water and the downward force of gravity on a building.

The potentially destructive upward force of a hurricane or tsunami occurs when an air pocket forms between the base of a structure, generally a concrete slab, and the water beneath—making the slab more buoyant.

These buoyant forces “rock the structure a little bit, and lifts it off [its foundation] and drops it off somewhere else,” Young said.

Another problem that design codes don’t address is a process more commonly associated with earthquakes: liquefaction, or the process of soil turning from a solid into a liquid.

Liquefaction happens when saturated soil is released from high pressure. In the case of Hurricane Katrina, the storm surge, which reached a high of 30 feet along some parts of the Mississippi coast, inundated the sand, saturating it and pressing down on it.

But when the water retreated, the pressure disappeared, causing the sand to decompress so quickly that no friction held the sand particles together.

“Then the sand would just flow out like a heavy liquid,” Young said, which can undermine buildings and bridges and cause them to collapse.

Similar processes can happen in tsunamis, she said. Her group is conducting experiments to better understand these phenomena.

Building design codes should account for liquefaction and the upward forces that water can exert, Young said.

Anything below the second floor of a building should be a “wash-away structures,” or walls that will easily wash away in a flood, she said, because otherwise the water can push on walls, causing them to transfer force to load-bearing columns, threatening the collapse of the structure.

For areas where there is little warning time before a tsunami or where populations are poor and live in rudimentary structures, buildings should be built to withstand these forces so that people can evacuate to upper floors.

“For example, Hawaii: If you have a tsunami there, in Waikiki, where can you go? You can’t go anywhere but up,” Young said. “So you need to make sure that people can do vertical evacuations.”