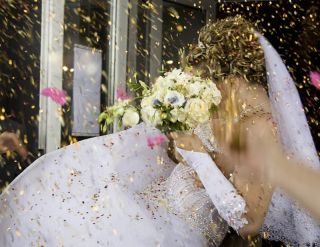 Brides-to-be often want to lose weight before their big day, but many don't achieve this goal and actually gain a few pounds in the months after marriage, a new study from Australia finds.

The study surveyed nearly 350 Australian women about 10 months before their wedding date, and asked whether they had an ideal wedding weight, and what that weight was. The brides were surveyed again one month before their wedding, and six months afterwards, to see if they lost or gained weight.

About half of the women had an ideal wedding weight, and wanted to lose about 20 lbs. (9 kilograms), before the big day. [10 Wedding Traditions from Around the World]

But one month before the weddings, the average weight of the women in the study had not changed. It turned out that this was because some women lost weight, while others gained weight, and the changes in the two groups canceled each other out.

Regardless of their pre-wedding weight changes, women in both groups gained weight after their wedding. Participants gained 4.4 lbs. (2 kg), on average, in the six months following their wedding.

This finding agrees with previous research showing women gain weight after marriage, but most of these studies were not able to determine how soon after marriage this weight gain occurred.

"Post-wedding weight gain is not surprising, and is perhaps a result of more relaxed dietary and physical activity habits now that the newlyweds no longer have a special event," the researchers, from Flinders University in Adelaide, write in an upcoming issue of the journal Body Image.

"It is equally possible that this weakened motivation for maintaining body weight is due to participants feeling like they have already 'snagged' their man and therefore no longer need to 'work' on their appearance," they said.

The study also found that women who had been told by a friend or relative that they should lose weight before their wedding actually gained more weight post-wedding than those who did not feel this pressure to lose weight.

Future research is needed to find out whether these women who felt pressure to lose weight are at increased risk for experiencing body dissatisfactionand disordered eating, the researchers said.

The researchers note that women in the study were recruited from bridal expos (which showcase wedding products such as cakes and flowers), and so the findings may not be representative of all brides. The findings might also differ if the study was conducted in other countries.