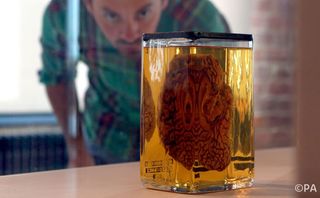 This is good, talking to people is better.
(Image: © Peter Byrne/PA.)

Imagine you’ve suddenly been given a job as a car mechanic but there’s a slight hitch: you know nothing whatsoever about cars, there are no books to help you, no internet and no-one who is willing to tell you anything. You’ve got some cars that work perfectly and a handful that seem not to work so well or are behaving differently. What do you do?

You will probably come to the conclusion that the easiest way to find out how cars work is to look at the engines of the ones that won’t start, are making an unusual noise, or won’t drive in a straight line, and see how they are different from the cars that are working normally. This same principle can be applied to understanding how the mind works.

In 1861, a doctor named Paul Broca was working with a patient “Tan”, a name bestowed upon him because it was one of the only things he could say. Tan had gradually lost his speech over a 21-year period, yet he was still able to understand what was said to him and had no obvious loss of intellectual function. Broca was an astute man and when this patient died he made a request to look at Tan’s brain. As he suspected, he found that a specific area of the brain had been damaged, a part of the frontal lobe, so he concluded that this area must be vital for speaking but not so for understanding speech.

Broca’s work paved the way for modern cognitive neuropsychology: the idea that we can identify mental functions that are independent of each other and that these may depend on different processes in the brain.

So we can learn a lot about how the brain works by studying people who have specific difficulties, for example those who have had a brain injury, or who develop dementia. Indeed we can also learn from those with unusual talents or abilities, such as the autistic savant who can memorise a whole piece of music on one listening. What is different about these brains?

Nowadays of course, it is possible to use modern techniques to look inside the brain, rather like opening up the bonnet of the car, but this doesn’t always tell us the answers we need, nor does it tell us anything about the actual mental processes, such as how we remember or how we think. To do this, we need to know more than what we can learn from a brain scan about which parts of the brain are active. We need to know what the brain is doing; this is where cognitive profiling comes in.

By looking at how people perform on a range of different mental tests, such as remembering a list of words or completing a problem-solving task, we can look for recurring patterns of strengths and weaknesses, which in turn allows us to identify the underlying mental processes.

When we apply this approach to a specific disorder, such as autism, it helps us understand the reasons for particular behaviour and also provides important clues for understanding the brain changes. For example, researchers have discovered that children with a diagnosis of Autistic Spectrum Disorder tend to process information differently to other children and this explains why they can be easily overwhelmed in a new or busy environment. This finding has also helped neuroscientists to find specific brain changes.

As well as helping us understand the nature of specific disorders, the cognitive profiling approach can be used in a clinical setting. For example, in my research we use cognitive profiling to distinguish Alzheimer’s Disease from other types of dementia. At an individual clinical level, this informs medical treatment and enables us to evaluate the efficacy of that treatment. Importantly, it also allows psychologists to provide a set of tailored strategies to improve day-to-day living, such as specific memory techniques and other psychological support. At a theoretical level this also provides important insight into how different forms of dementia affect memory, for example, and also sheds light on the processes involved in normal human memory.

While we are continuing to make excellent process on understanding how we think, speak and remember, and why this is different in some people, we still have a lot to learn about how the brain makes the mind. Our research with people who have had a traumatic brain injury, for example, is indicating that some people who appear to have no damage to the structure of their brain according to standard MRI scans, still show quite significant difficulties in certain tasks and in their day-to-day lives.

Brain scans clearly do not tell us everything. It is exciting that we can now “look under the bonnet” of the brain but it is important that we continue to look at how people are thinking too.

Decoding the brain, a special report produced in collaboration with the Dana Centre, looks at how technology and person-to-person analysis will shape the future of brain research.