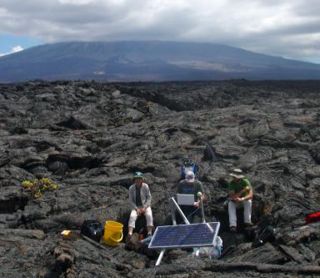 Sierra Negra is the largest and most active volcano in the Galapagos.
(Image: © Cynthia Ebinger, University of Rochester)

New 3D images reveal the underbelly and plumbing system of the most active volcano in the Galapagos Islands for the first time, according to a new report.

A team of researchers based at the University of Rochester buried 15 seismometers — tools used to measure the velocity and direction of waves generated by earthquakes — beneath the Sierra Negra volcano, the largest and most active volcano in the Galapagos Islands, located roughly 575 miles (925 kilometers) off the coast of Ecuador.

Seismic waves travel at different speeds depending on the type of material they pass through, so the researchers were able to use the data to differentiate fresh magma from cold crust beneath the volcano and create 3D images showing the location of different lava sources feeding the volcano.

The volcanoes of the Galapagos Islands are some of the most active volcanoes in the world, and have generated more than 50 eruptions in the last 200 years. The new images will help scientists understand what causes these eruptions, and potentially help researchers develop better volcano hazard assessments, the team said.The researchers found the main magma chamber was roughly 3.1 miles (5 km) underground, within old oceanic crust that has since been buried beneath cooled lava from past volcanic eruptions. The team also found cooled layers of lava at the top of the chamber where the magma tried to force its way through to the surface but got trapped before it could travel all the way up. [The World's 5 Most Active Volcanoes]

"With a better understanding of what's beneath the volcanoes, we'll now be able to more accurately measure the underground activity," study co-author Cynthia Ebinger, of the University of Rochester, said in a statement. "That should help us better anticipate earthquakes and eruptions, and mitigate the hazards associated with them."

The chain of volcanoes that make up the Galapagos Islands formed similarly to the way the Hawaiian Islands did. Both island chains were created by hotspots — hot regions in the Earth's crust containing fresh magma — trapped in the upper layers of oceanic tectonic plates. As the tectonic plates moved, they transported the hotspots along with them, leaving a trail of volcanoes and islands in their wake.

Still, the volcanic activity within the island chains differs in some ways as well, the team found. Satellite imagery of Sierra Negra and surrounding volcanoes showed that, unlike old Hawaiian Islands that have become dormant and no longer connect with fresher volcanic material within newer islands, the Galapagos volcanoes still appear to be connected by the same plumbing, with magma sinking in one volcano as magma rises in another.

The findings were detailed in the online January issue of the Journal of Geophysical Research: Solid Earth.