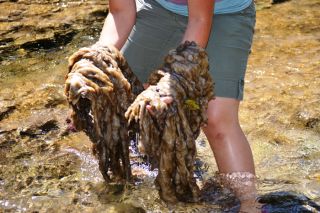 In 2013, the Duval River (tributary of the renowned Bonaventure River) experienced the most severe didymo bloom ever recorded in eastern Canada and comparable to extreme blooms observed over the past decade in New Zealand. In eastern Canada, recent climate warming may play a role in the establishment of conditions that favor didymo proliferation. Other Canadian provinces where didymo blooms have been identified as a concern include British Columbia and Alberta.
(Image: © Michel Chouinard.)

A pesky species of algae — sometimes called "rock snot" due to the way its tendrils attach to rocks in waterways — is infiltrating parts of eastern Canada due to global warming and not accidental introductions from humans tromping around, a new study suggests.

Outbreaks of didymo, as the species is called, have been reported in the United States, New Zealand, Europe and Canada in recent decades, causing policymakers and many scientists to say humans transported the algae. Fossilized algae in lake sediments, however, tell a different story.

One lake studied in the Gaspésie region of Quebec showed fossilized Didymosphenia geminata (one species of didymo) dating back to about 1970, or 36 years before the first official reports of an outbreak were recorded in the region.

Another lake, which has inflowing river sediments and does not contain evidence of didymo, showed an increase in other algae species at about the same rate that didymo proliferated in the first lake. The increase in algae was consistent with patterns associated with climate change, the researchers who examined the lakes said.

"We can't make any solid claims as to what the mechanism is that is favoring didymo, but we strongly suspect it has to do with climate," said study leader Michelle Lavery, a graduate student at the University of New Brunswick. [10 Surprising Results of Global Warming]

Lavery performed the research at Queen's University in Ontario under the supervision of John Smol and his postdoctoral researcher Joshua Kurek, an avid fly fisherman who always heeded the advice to "wash his waders" to stop the transport of this algae from waterway to waterway.

As an ecologist, however, Kurek knew that diatoms (single-celled algae) typically are present in many ecosystems because they're easily transported by the wind between different lakes. "If there's a bucket of water on the roof left overnight, it will be colonized by diatoms," Lavery told Live Science.

To see if the species was, indeed, invasive, Kurek recruited Lavery to help him check out the environment in two Quebec lakes: Lac au Saumon (a didymo-infested lake with a strong current running into it) and Lac Humqui, a headwater lake with no inflowing rivers.

When taking a sample core from Lac au Saumon's bottom sediments, researchers found remains of didymo all the way down to the bottom layers, from about 1970. Lac Humqui, although free of didymo, had "this really striking pattern of algal community change" that correlated well with the increasing didymo concentrations found in the Lac au Saumon core, Lavery said.

Operating under an assumption

The researchers also examined archival diatom surveys and found explicit mentions of the species dating back to at least 1910, with more oblique references to it dating back to 1896.

Researchers had been "operating under the assumption it's invasive, and it's guiding our research," Lavery said. "These are important steps to redirect our efforts." Although the researchers don't believe that didymos are invasive species, Lavery added it is good practice anyway to wash equipment between waterways to prevent human transport of other lifeforms.

Little is known about where didymo tend to colonize, but generally, the species prefers to grow in fast-flowing waters that don't experience a lot of disruption from ice melts every spring. In warmer climates, the ice melts are slower and less severe, making it easier for didymo mats to persist from season to season — suggesting that warming may be behind the recent proliferation of didymo in these parts of Canada.

While Lavery's research now focuses on Atlantic salmon, she said Kurek plans to expand on the didymo research and is now talking with other didymo researchers in Canada and the United States.

The study was published in the Canadian Journal of Fisheries and Aquatic Sciences and includes participation from Queen's University, Brock University in Ontario, and Quebec's National Institute of Scientific Research.