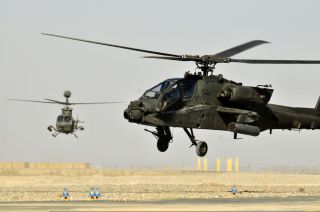 Mid-air collisions between wildlife and military aircraft can lead to costly and potentially fatal accidents, with birds posing the biggest threat to helicopters operated by the U.S. Army, Navy and Air Force, a new study finds.

A team of scientists led by Brian Washburn, a research biologist at the National Wildlife Research Center in Sandusky, Ohio, combed through records from the U.S. Army, Navy, Air Force and Coast Guard from 1979 to 2011 (although information across all years was not necessarily available for each branch of the military, Washburn told Live Science). Washburn and his colleagues found that birds are particularly problematic for military helicopters, which include Apache attack helicopters and huge Chinook vehicles that transport troops, supplies and artillery to and from the battlefield.

The researchers documented 2,511 wildlife strikes across all branches of the military. Whereas the accidental collisions occurred in almost every state, Florida had the highest number of incidents, with 617 recorded wildlife strikes. New Mexico and Georgia followed, with 204 and 192 strikes recorded in the respective states. [Supersonic! The 10 Fastest Military Airplanes]

For 812 of the military's recorded incidents, the type of animal that smashed into the helicopter was also described. Birds were the culprits in 91 percent of the cases, but the species differed according to the type of military service, since the Air Force, Navy, Army and Coast Guard operate their aircraft over different habitats, the researchers said. Other animals that struck military craft were bats.

Air Force helicopters were commonly struck by warblers (16.8 percent) and perching birds (12 percent). Naval vehicles tended to be hit by gulls (18.2 percent), seabirds (14.9 percent), shorebirds (13.4 percent) and raptors and vultures (12.6 percent), according to the study.

These types of accidents can be costly for the military, with damages that range from $12,000 to $337,000, according to the researchers. In some cases, wildlife strikes can also be fatal for those onboard the helicopter. Based on the military's records, wildlife strikes caused eight injuries — mostly cuts, lacerations or bruising when birds crashed through the windscreen of the aircraft — from 1993 to 2008, and two deaths in the United States so far.

"The two fatalities occurred in 2011 when a red-tailed hawk struck a U.S. Marine Corps 'Super Cobra' at Marine Corps Air Station in Pendleton in California," Washburn told Live Science in an email. "This resulted in a crash — costing the life of the pilot and co-pilot — and the total loss of a $24.5 million aircraft."

Washburn and his colleagues dedicated their study to the Marines who died in the 2011 bird strike.

Within the entire aviation industry, wildlife strikes cost an estimated $1.2 billion worldwide each year, they added.

"Findings from this research are being used by the U.S. Department of Defense to increase the awareness of this issue, mitigate the problem, and increase the safety of pilots and aircrews," Washburn said in a statement.

The findings were published online Feb. 23 in the journal Wildlife Society Bulletin.