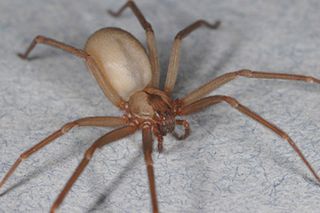 A Florida man has died from complications of a spider bite, a rare fatality caused by an arachnid.

The AP reports that Ronald Reese, 62, of Lakeland, Fla., died Feb. 16 after six months of treatment, including hospital stays, for a spider bite on his neck. It's unknown what kind of spider bit Reese, but the circumstances surrounding the bite and the fatal nature suggest it was a brown recluse.

Brown recluse spiders live in the southern and central United States and hang out in homes and other man-made structures. Reese was reportedly doing renovations when bitten. The spiders have a venomous bite that nevertheless does not affect most people beyond a small red wound; when someone sensitive to the venom is bitten, however, the result can be catastrophic. The most severe reactions involve an open "volcanic lesion" or virtual liquefaction of the tissue. [Images: Brown Recluse Bite Eats Hole in Woman's Ear]

Recovery can be slow. In 2013, researchers reported the case of a 10-year-old girl bitten by a brown recluse in New Mexico. The wound turned into a 2-inch (5 centimeter) lesion that took two surgeries and 56 days to heal.

Still, deaths are incredibly rare, with only two brown recluse bite fatalities reported between 2001 and 2005, according to the AP.