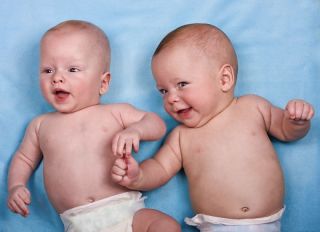 Being a twin or a triplet may increase a person's risk of developing anorexia, a new study from Sweden suggests.

The study followed more than 2 million Swedish children from birth into their teen and young adult years.

Children from multiple births(i.e., twins and triplets) were 33 percent more likely to be diagnosed with anorexia later in life compared to children from single births, the study found. [Seeing Double: 8 Fascinating Facts About Twins]

The findings held even after the researchers took into account other factors related to the child's birth or their mother's characteristics that could explain the link, such as whether the child was preterm, or if the mother smoked.

The results surprised the researchers, said study researcher Anna Goodman, of the Centre for Health Equity Studies at Stockholm University.

The researcher said she was perplexed by the link.

"I don't have a very good explanation for why twins or triplets seem to be at high risk for anorexia," Goodman told Live Science. "It's truly a bit of a mystery to me."

The findings are even counterintuitive, because the study showed having a sibling (other than a twin) tended to protect against developing anorexia, Goodman said.

There is some evidence that parents of twins tend to talk less to each child, because they are dividing their attention; research also shows that twins start talking a little later than average, Goodman said. "Parents are so busy with twins," she said.

But while this reduced communication or bonding could explain part of the link, Goodman said she suspects it would not entirely explain the link.

The researchers also found a reduced risk of anorexia in babies born at each additional week of pregnancy (such as being born at 39 rather than 38 weeks of pregnancy).

The risk of another eating disorder, bulimia, was higher in babies born with a high birth weight, according to the study. This is a more expected result, because high birth weight is linked to childhood obesity, and being overweight in childhood is a risk factor for bulimia, Goodman said.The researchers were not able to account for all the factors that might explain the findings, such as stress during pregnancy or early feeding habits. It's also possible that genetic factors might predispose a child to a high birth weight, as well as bulimia, Goodman said.

Future research is needed to confirm the findings, and to determine the underlying explanation for the links, Goodman said.

The study was published online Feb. 18 in the American Journal of Epidemiology.