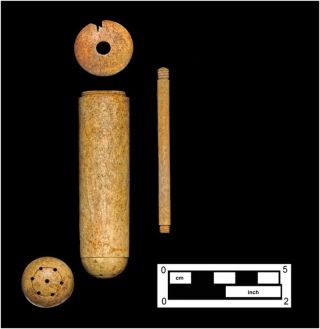 This vaginal syringe was unearthed at New York's City Hall. Its moving parts are separated in this picture.
(Image: © Chrysalis Archaeological Consultants)

While sifting through a 19th-century trash heap buried below Manhattan's City Hall Park, archaeologists found a dirt-caked tube that was finely carved out of bone and had a perforated, threaded screw cap. Only recently did they discover it was actually a vaginal syringe used for douching.

The feminine hygiene device seems to have been tossed out with the refuse of a pretty good party around the time City Hall was being built 200 years ago. Archaeologists say the syringe was unearthed among alcohol bottles, smoking pipes, fine pottery and the bones of sheep, cows, fish and even turtles — then a delicacy — that were likely served for dinner.

"We think the trash deposit feature was from a single event, possibly a celebratory event," said Alyssa Loorya, who heads the Brooklyn-based Chrysalis Archaeological Consultants. She explained the pile didn't have the characteristic layers that would build up over time in a continuously used dump. [The 10 Coolest Archaeology Discoveries]

The garbage pile was uncovered during excavations in 2010 as part of a project to rehabilitate City Hall, Loorya told Live Science. But the syringe wasn't identified until Chrysalis archaeologist Lisa Geiger, who is a graduate student at Hunter College, made the connection while she was volunteering as a guide at Philadelphia's Mutter Museum.

The museum houses all sorts of medical oddities, and while looking through the back collections, Geiger said she came across vaginal syringes that were the same size and shape as the object found at City Hall.

The device would have been used to irrigate the vagina with different solutions and tonics to treat venereal disease, prevent pregnancy and maintain good hygiene. (Douching is generally discouraged today as research has shown the practice can disturb the natural bacterial ecosystem of the vagina.)

These syringes weren't uncommon, but discussing feminine hygiene openly at the time was taboo. To research 19th-century douching, Geiger turned to historical ads and instructional booklets, which were becoming more prevalent as consumer trade grew and women took charge of family health care.

"There are these advertisements that kind of use creative language to dance around the use of these things," Geiger told Live Science. "It's not written about so overtly in the record, so the physical object in this case gave us an avenue to look at how women conceived of themselves and how they conceived of their hygiene."

Geiger, who presented her research at the meeting of the Society for Historical Archaeology in Quebec City last month, hasn't found any other syringes made from bone. This device is also notable for its careful construction and skilled craftsmanship, she said.

As for that wild City Hall party? The archaeologists have not linked the garbage to a specific affair, but the trash heap dates back to the period between 1803 and 1815, which leaves some tantalizing possibilities. Historical records indicate there was a big dinner with abundant food and drink when the cornerstone for City Hall was laid, Loorya said, and another big event when the building was ready to be opened in 1812.