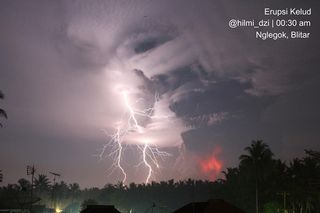 More than 200,000 people have been evacuated from the region near Mount Kelud, one of Indonesia's most deadly volcanoes. Lava fragments ejected from the volcano crushed the roof of a home, killing two people, AFP reported. Another man died from inhaling ash.

The eruption, at 11:29 p.m. local time, forced a Virgin flight from Sydney to Bali to turn around midair, and airlines have now grounded flights to and from tropical resorts such as the Phuket, Thailand, as well as Australia's Christmas Island and Cocos Island. Airports across Java, including the capital of Jakarta, are also temporarily closed, according to news reports.

No pyroclastic flows or lahars have been reported yet, but in past eruptions, these deadly mixes of gas, water and volcanic material have killed thousands. A lahar killed more than 5,000 people when Kelud erupted in 1919. A drainage system was built to empty the crater lake following the 1919 disaster, in order to prevent future lahars.

Kelud's last eruption was in 2007, when a dome of lava started growing within its crater lake. In recent weeks, the volcano's alert level, which tracks its risk of eruption, was raised to yellow and a 3-mile-radius (5 km) evacuation zone established as seismic activity ramped up below Kelud. The number of shallow volcanic tremors rose from an average of one to two per day to more than 100 per day since the start of February. Water temperature in the crate lake also rose by more than 9 degrees Fahrenheit (5 degrees Celsius), the Indonesian Geological Survey said.

Indonesia has some 130 active volcanoes. Earlier this month, a blast at Mount Sinabung, in western Sumatra, killed 16 people. Sinabung volcano has been erupting since September 2013.