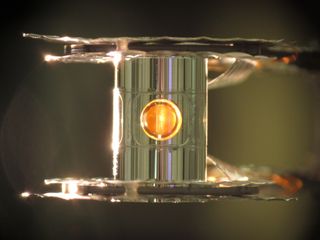 In a new fusion experiment, researchers fired laser beams at a gold canister, called a hohlraum, which had a coating of fuel inside made up of deuterium and tritium, heavy isotopes of hydrogen.
(Image: © Dr. Eddie Dewald)

Scientists have announced a major achievement in the step toward viable fusion energy.

A new set of experiments has produced more energy than was contained in the fuel that was put into the system, according to a paper published today (Feb. 12) in the journal Nature. The experiments also show the beginnings of a process that could lead to a self-sustaining reaction, or ignition, Omar Hurricane, the study's lead author, said in a press briefing.

"We're closer than anyone else has ever gotten before," said Hurricane, a physicist at the Nuclear Ignition Facility at Lawrence Livermore Laboratory in California.

Still, the new results are miles away from those needed to make a clean, safe nuclear fusion power plant, or even a nuclear fusion weapon, experts say. [Science Fact or Fiction? The Plausibility of 10 Sci-Fi Concepts]

Scientists have long sought a way to create limitless, safe energy by fusing two atoms together. But the running joke is that fusion power is always 30 years away, and has been so for the last 30 years, said Stewart Prager, director of the Princeton Plasma Physics Lab, who was not involved in the study.

Fusion occurs at the heart of the sun, where incredibly dense gas crushes two hydrogen atoms together to form helium atoms.

But fusion on Earth requires incredibly high temperatures — at least 180 million degrees Fahrenheit (100 million degrees Celsius) — and must overcome the strong repulsive force that prevents atoms from fusing. To be a viable energy source, the fusion reaction needs to be self-sustaining, and should produce more energy than it takes to initiate the process.

The new results from the Nuclear Ignition Facility (NIF) take fusion research much closer to those goals.

In the current set of experiments, the researchers fired 192 laser beams at a gold canister, called a hohlraum. Inside the hohlraum is a miniscule coating of fuel made up of deuterium and tritium, heavy isotopes of hydrogen that have a different number of neutrons than the most common form of hydrogen.

When the lasers hit the hohlraum, the gold releases X-rays that vaporize the metal and compresses the fuel coating by a factor of 35. The fuel reaches densities two to three times greater than those at the sun's core.

"If you started with a basketball, that would be like compressing it down to the size of the pea," said study co-author Debbie Callahan, a researcher with NIF, in the press briefing.

The compression overcame the repulsive force and spurred a fusion reaction among the hydrogen atoms. This reaction, in turn, created radioactive alpha particles, or the nuclei of helium atoms, that heated the fuel up and spurred even more fusion reactions, a process known as bootstrapping — the first step toward ignition.

The new experiments, or "shots," have surpassed one of the break-even goals for fusion: that the fuel produces more energy than was put into it, Hurricane said.

Still, the team has a long way to go before nuclear energy from fusion becomes feasible. The fuel itself produced more energy than was put into it, but the entire process requires roughly 100 times more energy, for instance to power the lasers, than was generated, Hurricane said.

But theoretical models suggest they have a shot at achieving ignition by tweaking the process, Hurricane said.

"The demonstration of self-heating by alpha particles is an essential step towards fusion," Labaune, who was not involved in the study, told Live Science.