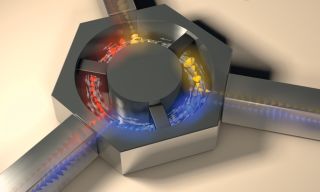 The device, called an acoustic circulator, breaks the fundamental principle that sound, and other types of waves, are a two-way street.

The findings, published today (Jan. 30) in the journal Science, could lead to the sound equivalent of a one-way mirror. With such a device, people can hear someone talking, but they themselves cannot be heard. [The 9 Biggest Unsolved Mysteries in Physics]

All waves — whether visible light, sound, radio or otherwise — have a physical property known as time reversal symmetry. What that means is that a wave sent one way can always be sent back.

For radio waves, researchers figured out how to break this rule using magnetic materials that set electrons spinning in one direction. The resulting radio waves detect the difference in the material in one direction versus the other, preventing reverse transmission. As a result, transmission towers can broadcast the top 40 hits, without having the radio waves bounce back.

But so far, researchers hadn't figured out how to complete the trick for other types of waves.

To accomplish the feat with sound waves, which are pressure oscillations in the air, the team created a cavity loaded with tiny CPU (central processing unit) fans that spin the air with a specific velocity. As sound waves go through the cavity, they are routed through one of three pipes (think of a sea star with the cavity in the center and each of the pipes is one of the sea star's appendages), each of which has a microphone at the end.

The air is spinning in one direction, so the flow of air "feels" different to the wave in one direction versus the other, preventing backward transmission. As a result, sound waves can go in, but they can't go the other way. The result is one-directional sound.

The new technique could be used to create the sound equivalent of one-way glass. There are some obviously stealthy ways to use the method, such as in spying devices.

"I can listen to you, but you cannot detect me back, you cannot hear my presence," Alù told LiveScience.

But the principle could also potentially be used to create one-way light waves.

The findings will likely lead to many useful applications, said Sebastien Guenneau, a metamaterials researcher at the Institut Fresnel in France, who was not involved in the study

"I would be surprised if sound industries do not pick up this idea," Guenneau told LiveScience. "This could have great applications in sound insulation of motorways, music studios, submarines and airplanes."