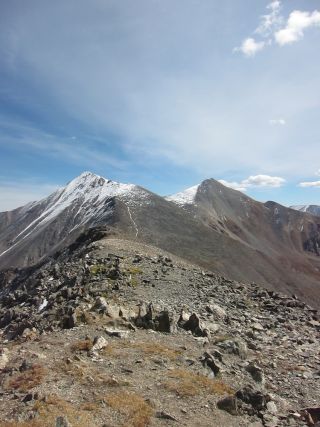 Colorado's highest mountains are getting new names in honor of the Super Bowl — at least temporarily.

Putting two and two together, Governor John Hickenlooper announced today (Jan. 29) that on Super Bowl Sunday, each of Colorado's 14ers will go by the name of a Broncos player.

Plenty of thought went into matching up the other peaks and players. Longs Peak in Rocky Mountain National Park will be known as Matt Prater Peak, because the 29-year-old placekicker "kicks 'em long," according to the Governor's proclamation. Crestone Peak, which is surrounded by other 14ers, goes to Steve Vallos, "the rock of impressive offensive lines."

Wide receiver Eric Decker gets Grays Peak, which sits next to fellow 14er Torreys Peak. Torreys will be named Demaryius Thomas Peak after the other partner in the "dynamic duo" of Broncos wide receivers. Kit Carson Peak gets named after long snapper Aaron Brewer, because "his long snaps find their path just as Kit Carson found paths through the frontier."

Other players are honored for their biographies. Defensive tackle Sylvester Williams was born in Missouri, so he can claim 14,074-foot (4,290 m) Missouri Mountain as his namesake. Joel Dressen, a tight end, gets the honor of gracing famous Pikes Peak with his name, because he is the only player on the Broncos roster to have graduated from a Colorado university.

The naming of things

Of course, even if the Broncos cinch the Super Bowl win, the mountainous honors can last only a day. Peak names were once assigned at the whim of explorers who first sighted them, whether Native American or white. In 1890, the U.S. Department of Interior established The Board on Geographic Names to gain some control over the proceedings.

Local feelings on a peak's proper name are sometimes taken into account, but not always. Alaska's Mount McKinley, America's highest peak, was known by native peoples as Denali before a gold prospector with a political ax to grind changed the name in support of his preferred presidential candidate, William McKinley. Alaska's state naming board changed the mountain's name back to Denali, but the national board has refused to do so, leaving this peak with two official names.

Hickenlooper's tongue-in-cheek proclamation aside, Colorado's 14ers have not been immune to name-changes. Mount Evans (14,265-foot (4,348 m)) was originally known as Mount Rosalie, after Rosalie Osborne, the wife of author and explorer Fitz Hugh Ludlow. It wasn't Ludlow that gave his wife this honor, though; it was Albert Bierstadt, a famous landscape artist who would later have another 14er named after him. Bierstadt would later marry Osborne himself.

Mount Rosalie would last as a name for only about 30 years. In 1895, the Colorado legislature renamed the mountain Mount Evans after the second governor of the territory. A nearby 13,575-foot (4,138 m) peak now bears Rosalie's name.

On Super Bowl Sunday, though, Rosalie Peak will keep its name, while Mount Evans will be renamed in honor of Broncos player Nate Irving.

"This linebacker forms an imposing backdrop to opponents, just like this peak does to Denver," the governor's office wrote.