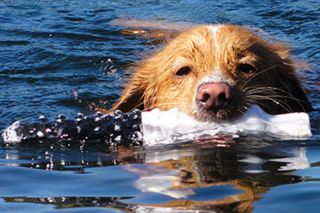 (ISNS) -- Don’t say that scientists aren’t creative. When Frank Fish, a biologist at Pennsylvania's West Chester University, wanted to design experiments for the first in-depth look at the dog paddle, he went straight to his own furry friends.

Fish wanted to know exactly how dogs went about their specific swimming maneuver. Although animals from armadillos to humans have been described as using the doggie paddle, “no one had actually defined what a dog paddle was,” said Fish. So he recruited eight dogs from six different breeds, ranging from Newfoundlands to Labrador retrievers to the tiny Yorkshire terrier. Three of the pooches were his own, and others belonged to members of his research team.

“It wasn’t like we were throwing dogs into the water who weren’t used to it,” he said. “We chose dogs who already liked to swim.”

The researchers set up underwater cameras in a pool specially designed for equine rehabilitation. Then they brought in the dogs, recording the movement of their legs beneath the water. The research was presented earlier this month at the 2014 Society for Integrative and Comparative Biology meeting in Austin, Texas.

By analyzing the footage, Fish and his colleagues made a remarkable observation: dogs of vastly different sizes have the same paddle stroke underwater. A dog paddle is similar to an aquatic trot, where a dog’s legs are moving forward and back in diagonal pairs – except that the strides are longer and the gait faster.

“Despite all these different dogs having different terrestrial gaits, they all basically focus in on one gait when they’re swimming,” Fish said.

Examining dogs’ paddling techniques could help scientists understand how the ancestors of animals like dolphins went from living on land to swimming in the seas. Fish says he’s trying to understand what natural selection factors were in play for animals that were just beginning to swim. Although dogs aren’t direct predecessors of cetaceans -- the category that includes dolphins, whales and porpoises -- aquatic mammals did evolve from longed-legged quadrupeds that moved into the water, and over time dropped their paws in favor of fins.

Scientists estimate that the first aquatic mammals probably flopped into the water around 60 million years ago, and it took 20 million years for them to evolve flukes and flippers like modern-day whales and dolphins.

Those animals probably moved slowly. The dog paddle is effective for moving in water, but it’s not that fast. Fish pointed out that humans can only swim at about 5 miles per hour, “which isn’t that great, despite all the medals and accolades we give out for swimming.” Humans can run much faster, and other animals that are adapted to aquatic environments can swim 25 miles per hour or faster.

Fish said he plans to continue the dog paddle studies, using a special channel called a flume to precisely calculate and then compare how much energy a dog uses when swimming as opposed to running.

“I still want to know what animals have to give up as they’re going along evolutionarily from terrestrial to aquatic,” said Fish.

John Hermanson, a professor in the department of biomedical sciences at the Cornell University College of Veterinary Medicine in Ithaca, N.Y., says he’d be interested to know the differences between dogs that have been bred to swim with big paws that drag through the water – like retrievers – and those that haven’t. “This work really sets up the question of cost of locomotion in the water, what makes certain dogs better at it,” he said.

Hermanson studies locomotion in a range of species, and he said that Fish’s question of what animals had to give up in a new environment is a vital one. He pointed out that there are 1,200 species of bats that are committed to flight – but some of them, like vampire bats – have also returned to land are become adept at running around. There are tradeoffs in changing terrain.

Fish said that the extreme case would be to measure how much energy a dolphin would need to move on land -- it would be enormous, requiring a huge amount of energy to move an incremental distance.

“A terrestrial animal, on the other hand, might have a high cost to move in water, but the [energy] cost would be lower on land,” he says. “So the question is: where do we see the tipping point, moving on land versus moving in water?”

Inside Science News Service is supported by the American Institute of Physics. Katharine Gammon (@kategammon) is a freelance science writer based in Santa Monica, Calif., and writes for a wide range of magazines covering technology, society, and animal science.