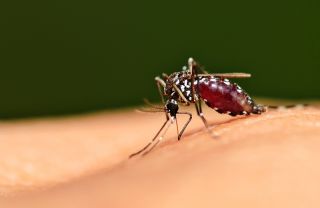 A woman in Texas who died in 2012 succumbed to a rare blood cell disease, which was caused by the mosquito-borne dengue virus infection, according to a report of her case published today.

The case shows that while dengue remains rare in the United States, vigilance for the disease is important, and health professionals should be aware of the complications the virus can cause.

The woman died after her dengue infection brought on another condition called hemophagocytic lymphohistiocytosis (HLH), in which white blood cells build up in the skin, spleen and liver, and destroy other blood cells. HLH is most frequently associated with Epstein Barr virus infection, but also has been linked to dengue, according to the researchers, from the Centers for Disease Control and Prevention.

The 63-year-old woman was only the third person in the United States in the past 10 years to become infected by dengue virus without leaving the country. Other U.S. patients with dengue fever were infected while traveling to tropical regions, where the virus is endemic. [10 Deadly Diseases That Hopped Across Species]

Mosquitos capable of transmitting the virus can be found in most U.S. states, and there have been recent outbreaks of dengue in Florida, Hawaii and Texas, after travelers brought the virus home with them.

The woman developed fever, headaches and pain in her leg while traveling in Santa Fe, New Mexico, in August 2012. After returning to her home in Texas, she was initially diagnosed with West Nile virus infection, but later developed serious blood conditions and liver failure, and died in October 2012, a few days after doctors diagnosed her with HLH. Dengue virus was detected in a biopsy of her bone marrow.

Dengue virus infects an estimated 400 million people worldwide each year. The incidence of dengue in the United States is unknown, according to the CDC. Early recognition of the infection and immediate treatment can substantially lower the risk of death.

There are several possible scenarios that could explain how the Texas woman became infected with dengue, the report's authors said. The patient spent almost a month in Santa Fe, a city generally too elevated for mosquitos to live. However, an imported mosquito might have survived in the warmer August climate, and infected the patient, the researchers said.

It is also possible that the patient initially had another illness and was infected with dengue while en route to Texas, where the virus is more likely to be found, according to the report.

Most U.S. cases of dengue occur in the people living in Puerto Rico, the U.S. Virgin Islands, Samoa and Guam, according to the CDC. People living in or traveling to areas where a risk for dengue exists should avoid mosquito bites by using insect repellent, and staying in residences with air conditioning.