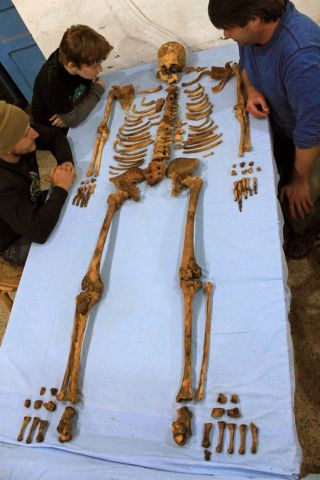 An unknown pharaoh named Woseribre Senebkay has been unearthed in southern Egypt.

The rediscovered king's mummy was found in pieces in a pile of debris, ripped apart by tomb robbers. However, University of Pennsylvania archaeologist Josef Wegner, doctoral student Kevin Chahail and their colleagues were able to piece together the royal skeleton. They found that Senebkay was 5 feet, 10 inches (1.75 meters) tall and was in his mid- to late-40s when he died.

The modest tomb is the first physical evidence of the Abydos Dynasty, a reigning lineage that had been suspected to have existed, but never proven.

"It's exciting to find not just the tomb of one previously unknown pharaoh, but the necropolis of an entire forgotten dynasty," Wegner said in a statement. [See Images of the New Tomb and Pharaoh's Mummy]

The archaeologists first uncovered hints of Senebkay in the summer 2013. That field season, the researchers discovered an enormous red quartzite sarcophagus (or coffin) at the site of Abydos. It was clear that the 60-ton behemoth had been removed from its original tomb, but no one could tell who had first been buried inside.

Continued excavations revealed a story of ancient Egyptian recycling. As it turns out, the original owner of the sarcophagus was a pharaoh named Sobekhotep. Most likely, it belonged to Sobekhotep I, the founder of Egypt's 13th Dynasty around 1800 B.C.

Sobekhotep I was buried in a pyramid in Abydos. A century and a half later, pharaohs apparently began looting Sobekhotep I's tomb for their own purposes. One unknown king snagged the huge sarcophagus. Another king picked up a cedar chest, covered up Sobekhotep's name, and used it in his own tomb. The recycling ruler's name? Senebkay.

The items in the tomb would have once shown with gold gilt, but those riches are long gone in the hands of robbers. Senebkey's mummy rested in a jumble along with fragments of his coffin, funerary mask and the chest he borrowed from Sobekhotep I. The chest would have held the jars holding Senebkey's internal organs.

The tomb walls also label its inhabitant as the "king of Upper and Lower Egypt, Woseribre, the son of Re, Senebkay," which is how archaeologists know what to call the new mummy. The discovery confirms the existence of Senebkay's Abydos Dynasty, previously hinted at only through fragmented documents. One of these documents, the Turin King List, is written on papyrus and dates to 1200 B.C., some 400 years after Senebkay lived. The list shows two kings with variations on the royal name "Woser … re." On the list, these kings head up a dynasty of more than a dozen other kings, but most of those names are illegible or broken off.

Archaeologists suspect at least 16 tombs of kings from this era are hidden nearby. The Abydos kings made their burial ground near the tombs of earlier pharaohs, it seems, including Sobekhotep I. The reuse of old tomb materials suggests the Abydos pharaohs were relatively poor compared with rulers of other dynasties.

"Continued work in the royal tombs of the Abydos Dynasty promises to shed new light on the political history and society of an important but poorly understood era of Ancient Egypt," Wegner said.