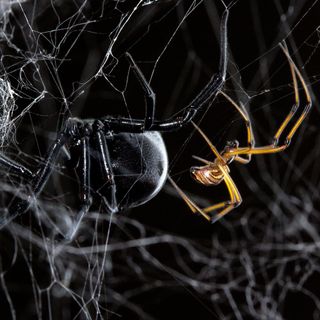 Miley Cyrus may have made "twerking" a household word, but male black widow spiders are the real masters of the rump-jiggling dance move. These arachnids twerk their abdomens to avoid getting eaten by potential mates.

Vibert and her colleagues reported their findings today (Jan. 16) in the journal Frontiers in Zoology. [See Video of the Twerking Spiders]

Spiders use their webs as extensions of their own bodies, able to sense vibrations on the threads that trigger their response to prey. But when an arachnid gentleman caller comes along, he runs the risk of being mistaken for a delicious moth and attacked.

Vibert knew from observing hobo spiders (Tegenaria agrestisi) that mating spiders perform elaborate dances. She wanted to know what was behind these complex displays.

They found that prey and potential mates make very different vibrations. The male spiders produced continuous, long-duration vibrations with low amplitudes, meaning that they were "quiet" compared to the sporadic, percussive vibrations made by trapped prey.

The differences were especially pronounced in black widow spiders, Vibert told LiveScience. Male black widows produced these good vibes by moving their abdomens in a rapid motion — reminiscent of twerking.

Next, the researchers played recorded vibrations onto webs occupied by females. The scientists tested vibrations from both prey and male spiders, played on either high or low, and watched how the females responded.

"It didn't really matter what the vibration sounded like, but it had to be quiet," Vibert said. "If you play back a very quiet, whisperlike vibration, then the females did not respond aggressively."

Strong vibrations sent the female spiders scurrying over in attack mode. But little whispers simply got their attention — some turned toward the source of the vibrations, and some even responded with abdominal twitches of their own, suggesting back-and-forth communication.

That wouldn't be the only amazing trick spiders can play with their webs. On Jan. 8, a YouTube video revealed the magic of the slingshot spider (probably a species called Naatlo splendida), which actually flings its entire web at potential prey.

Still, it's the communication aspect that amazes Vibert.

"I think what really blew my mind was just how complex their signaling system is," she said. Courting spiders often show off with graceful dances, bobbing, weaving and circling around their intended mate, Vibert said.

"Spiders can be really beautiful, and they're a lot more complex than most people give them credit for," Vibert said. "If you go past the spider fear, the phobia, there are really quite a lot of things that will make you smile."