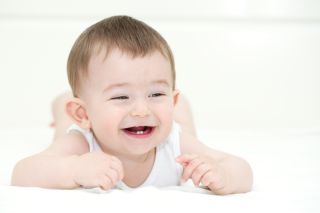 Most babies start teething when they are between 6 and 8 months old.

By the time a child is 2 and a half years old, his or her final set of teeth — the outermost molars — should be in place, for a total of 20 teeth, according to the U.S. National Library of Medicine.

Irritability; drooling; gum tenderness and swelling; lack of appetite for solid foods; sleeping problems; and biting or chewing hard objects are all common signs of teething.

Though a teething baby may also experience a mild increase in body temperature, a fever higher than 102 degrees Fahrenheit (38.9 degrees Celsius) is not a symptom of teething, according to a 2000 article in the journal Pediatrics. Likewise, teething doesn't cause diarrhea, as is sometimes believed.

To help ease a baby's teething pain, experts recommend acetaminophen or ibuprofen (but not aspirin, as the drug has been linked to Reye's syndrome, a fatal illness that affects the brain and liver). Topical teething gels can also effectively relieve teething pain, but check with your doctor before giving an infant any kind of pain medication.

Additionally, cool objects and foods can help sooth teething discomfort, but frozen objects, such as ice, should be avoided.