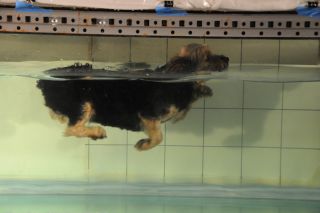 It’s a technique that armadillos, turtles and even humans can use to stay afloat and move in water.

For the research, presented at the 2014 Society for Integrative and Comparative Biology meeting held in Austin, biologist Frank Fish and colleagues started out with eight dogs representing six breeds. They ranged from Yorkshire terriers to the Newfoundland.

Fish, from West Chester University, and his team recorded the dogs’ leg and paw movements, as the dogs swam in ultra-clear water at a rehabilitation pool at the University of Pennsylvania that’s normally reserved for horses.

The researchers found that dogs swam with a gait that’s nearly identical to a familiar trot on land. When a dog kicks into this kind of slow run, more brisk than a walk, diagonal pairs of legs move together.

When swimming, the only difference was that they moved their legs faster and somewhat beyond the range of motion for a trot.

Aside from revealing more about dogs, the research could help to explain how the ancestors of cetaceans, such as whales, dolphins and porpoises, went from long-limbed four-legged land dwellers to permanent sea inhabitants.

Fish suspects that, like dogs, the ancestors of cetaceans just jumped in water — probably to obtain food and shelter — and stayed in it over longer and longer periods. Changes to their musculature and their skeletons eventually led their limbs to become more like paddles.

They probably fumbled a lot when they first took to the water.

As Fish puts it, “How bad are you at the beginning?”