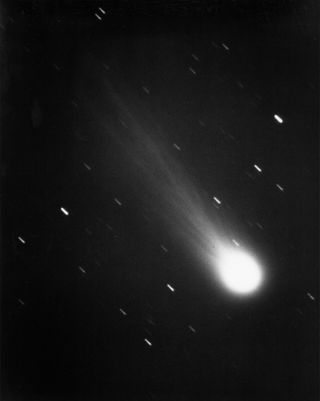 SAN FRANCISCO — The ancients had ample reason to view comets as harbingers of doom, it would appear.

A piece of the famous Halley's comet likely slammed into Earth in A.D. 536, blasting so much dust into the atmosphere that the planet cooled considerably, a new study suggests. This dramatic climate shift is linked to drought and famine around the world, which may have made humanity more susceptible to "Justinian's plague" in A.D. 541-542 — the first recorded emergence of the Black Death in Europe.

The new results come from an analysis of Greenland ice that was laid down between A.D. 533 and 540. The ice cores record large amounts of atmospheric dust during this seven-year period, not all of it originating on Earth. [‪Photos of Halley's Comet Through History]

"I have all this extraterrestrial stuff in my ice core," study leader Dallas Abbott, of Columbia University's Lamont-Doherty Earth Observatory, told LiveScience here last week at the annual meeting of the American Geophysical Union.

Certain characteristics, such as high levels of tin, identify a comet as the origin of the alien dust, Abbott said. And the stuff was deposited during the Northern Hemisphere spring, suggesting that it came from the Eta Aquarid meteor shower — material shed by Halley's comet that Earth plows through every April-May.

The Eta Aquarid dust may be responsible for a period of mild cooling in 533, Abbott said, but it alone cannot explain the global dimming event of 536-537, during which the planet may have cooled by as much as 5.4 degrees Fahrenheit (3 degrees Celsius). For that, something more dramatic is required.

Ice core data record evidence of a volcanic eruption in 536, but it almost certainly wasn't big enough to change the climate so dramatically, Abbott said.

"There was, I think, a small volcanic effect," she said. "But I think the major thing is that something hit the ocean."

She and her colleagues have found circumstantial evidence of such an impact. The Greenland ice cores contain fossils of tiny tropical marine organisms — specifically, certain species of diatoms and silicoflagellates.

An extraterrestrial impact in the tropical ocean likely blasted these little low-latitude organisms all the way to chilly Greenland, researchers said. And Abbott believes the object responsible was once a piece of Halley's comet.

Halley zooms by Earth once every 76 years or so. It appeared in Earth's skies in A.D. 530 and was astonishingly bright at the time, Abbott said. (In fact, observations of Halley's comet go way back, with research suggesting the ancient Greeks saw the comet streaking across their skies in 466 B.C.)

"Of the two brightest apparitions of Comet Halley, one of them is in 530," Abbott said. "Comets are normally these dirty snowballs, but when they're breaking up or they're shedding lots of debris, then that outer layer of dark stuff goes away, and so the comet looks brighter."

It's unclear where exactly the putative comet chunk hit Earth or how big it was, she added. However, a 2004 study estimated that a comet fragment just 2,000 feet (600 meters) wide could have caused the 536-537 cooling event if it exploded in the atmosphere and its constituent dust were spread evenly around the globe.