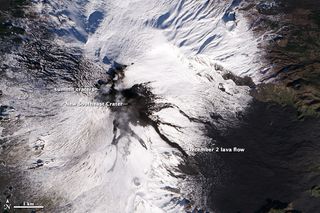 On Dec. 13, NASA's Landsat 8 satellite snapped lava winding down Etna's snowy slopes — the aftermath of a Dec. 2 eruption. In the image, volcanic gas puffed from Etna's New Southeast Crater, the source of spectacular lava fountains seen in recent months from nearby villages, according to NASA's Earth Observatory.

The volcano erupted again on Dec. 14, the day after the satellite caught the fresh mix of fire and ice. Mount Etna, on the island of Sicily, is one of the most active volcanoes on Earth, spouting ash, gas and lava several times a year. The burst of activity forced the closure of Sicily's Catania and Comiso airports, according to news reports.

On Dec. 15, new vents opened on a cone at Etna's New Southeast Crater, fountaining lava into the air, according to Italy's National Institute of Geophysics and Volcanology (INGV). Huge bursting magma bubbles and loud blasts rattled windows several miles (tens of kilometers) away.